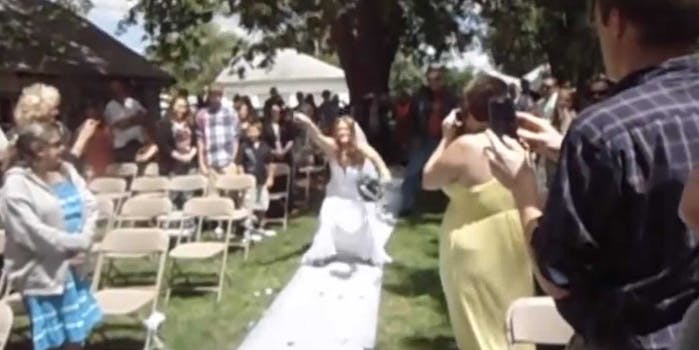 Woman walks down the aisle to ‘Crazy B**ch,’ and YouTube is outraged

This "crazy bitch wedding march" has fans of "traditional" marriage all riled up.

Over the weekend, Kendra Garber posted a minute-and-a-half clip of her mother’s wedding to YouTube. Since it was her special day, her mother decided to walk down the aisle singing Buckcherry’s “Crazy Bitch.” In the clip, you can see a father trying to cover his son’s ears, though several other guests look on like this is a normal thing.

She eventually ends up next to her groom, who is wearing a bandana. So are the groomsmen.

So what did YouTube commenters think about this? Well, they had their usual wealth of informed opinions. She was accused of ruining the “sanctity” of marriage. Garber was told she should be ashamed of her mother. But then the comments quickly went from hand-wringing over the absence of wedding tradition to straight up attacking her mother’s personal life and appearance. She was called white trash, disgusting, a slut, a bitch, an idiot, a skank. But wait, there’s more:

“well that tune in a club full of drunks might be cool, but at a wedding with children listening and watching is a sign that someone? is a skank from birth, sad reminder of the qualities of certain females, well maybe her husband will get tired of her being on top of it and find him a female that earns good money and keeps all her naughties in the bedroom with the door closed. Fail!”

“May your womb dry up so it can’t reproduce and drag our race lower. Live long and healthy though. Unless your wedding was paid for by food stamps, which I’m assuming it was. Then all is lost.”

“just impressed she can move like? that without the excess arm flab attempting to escape her body.”

The bride eventually entered the fray to defend her wedding:

“who made the rule on how my wedding should be and just so you know it was my wedding at my house and they were my guests if and when you ever find anyone to marry your narrow minded self you can have your wedding at your location with your guests in your way and guess what I will respect your choice because I live in the USA and that is what we do here. And thank you to all my friends and family (including my son) who fight or have fought for my freedom to do this.”

Another wedding guest explained the reception was a “parade of Harley’s [sic] to the reception and black sunglasses.. and if you don’t like it get the fuck off the video and don’t watch it to begin with .. it is called crazy bitch wedding march.”