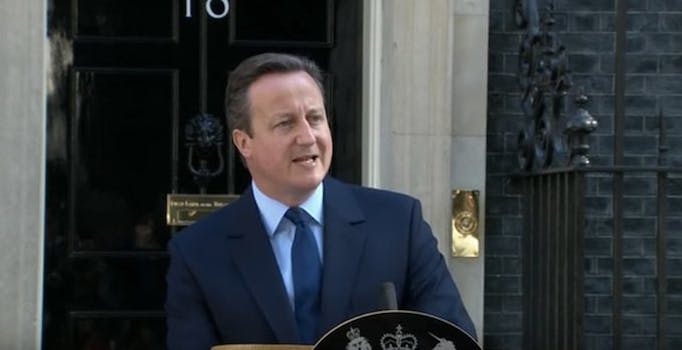 Brits are Googling ‘what happens if we leave the EU?’ one day after voting to do exactly that

Last night, as it became clear that Britain had voted to exit the European Union, Google Trends reported a 250 percent spike in searches for “what happens if we leave the EU?”

Perhaps it would have been prudent to ask the question before polls had closed and “Leave” apparently emerged victorious. But perhaps that’s also none of our business.

Markets are crashing around the world, Prime Minister David Cameron has resigned, and things have become uncertain for immigrants to the U.K. and U.K. citizens living abroad in the EU. And Scotland will likely take this opportunity to reconsider that whole independence question. How come nobody predicted this?

Oh, wait, everybody predicted this.

“It’s likely that Brexit (and what an ugly neologism it is) would lead to plummeting stock markets and an economic recession, with losses to GDP calculated by the Centre for Economic Performance at up to 9.5%—worse than the 2008 financial crisis,” wrote Alex Preston in Guardian, more than a year ago. The article was headlined “What would happen if Britain left the EU?” and is one of the top Google results for the question.

But hey, that happened. And it happened, in part, due to voters who weren’t necessarily uninformed, but assumed their individual votes couldn’t possibly make a difference.

Can we learn voting matters!?! "I’m a bit shocked…My vote, I didn’t think was going to matter too much." #Brexithttps://t.co/MAc9Xiug4y

Except for that one lady who voted leave but didn't think her vote counted….she's probably not qualified https://t.co/xIk5hYA3Nn

Guy on BBC just said he voted leave but now he’s worried because he didn’t think it would actually happen. Great.

And now that it’s over, Britons are asking themselves one other thing: “What is the EU?”

"What is the EU?" is the second top UK question on the EU since the #EURefResults were officially announced pic.twitter.com/1q4VAX3qcm

Oh, god. America, we’ve got a big election coming up in a few months. Don’t let this be us.