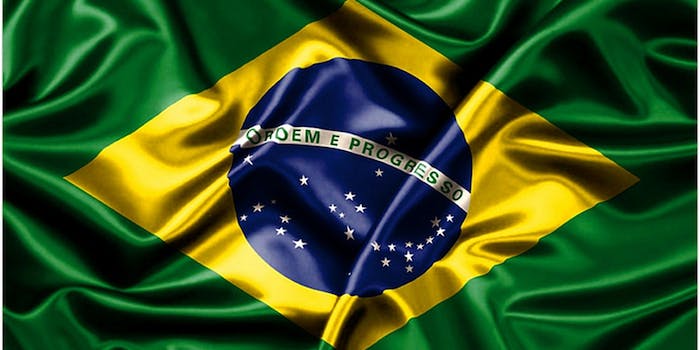 Brazil’s health ministry removed an ad yesterday aimed at reducing the AIDS-related stigma against the country’s sex workers and prostitutes.

Brazil’s health ministry removed an ad yesterday aimed at reducing the AIDS-related stigma against the country’s sex workers and prostitutes. The ad on the ministry’s website was part of a larger campaign educating citizens about sexually transmitted diseases and proclaimed: “I am happy being a prostitute.”

Health Minister Alexandre Padilha told reporters: “I don’t think this is a message the ministry should be sending. Our campaigns orient people how to avoid sexual transmitted diseases,” according to the Huffington Post.

“For as long as I remain in office, an ad like that will not be part of our campaigns,” he told Agencia Estado.

Though sex workers are often stereotyped as downtrodden, resentful, or resigned in their work—and the ad would have worked to combat that image—sex workers interviewed by the Daily Dot about the Brazilian ad’s removal were mixed on whether it was the right thing to do.

“It’s great that the government has implemented a health program instead of pretending they don’t exist,” she said. “But I don’t think ‘Happy Prostitute’ applies to streetwalkers and those turning tricks for fast cash to buy drugs but regardless of whether one is happy with being a prostitute or not, the importance is prevention of STDs.”

Turning the ad to sex workers seems odd, she said, when chlamydia and HPV are common among the general public. “We have a lot of ladies who come to the legal brothels and who tested positive for chlamydia and didn’t know they had it because it can be asymptomatic while causing health problems,” she said. “Legalizing and routinely testing prostitutes in addition to routine use of condoms is the only way to guarantee that prostitutes with STDs aren’t working and risking the health of their clients.”

Critics in Brazil were upset that the campaign glorified prostitution and that the country has experienced a boom in sex tourism, according to the BBC. “The Brazilian government is highly praised for its AIDS programme, which includes the distribution of free condoms and a pragmatic approach to the problem in an overwhelmingly Roman Catholic country,” read the BBC story.

Violet Rose, a sex worker in the U.K., said “street work,” like the kind depicted in the ad, only accounts for a very small minority of the industry, and illustrating all sex workers as women standing on street corners is detrimental. The ad, she said, had good intentions but missed the mark.

“It should not be incumbent on sex workers to like their job to gain their human and labour rights, access to healthcare and safe working conditions and respect for their work,” she wrote.

“Ending stigma and reducing prejudice were laudable aims of a campaign, but predicating sex worker rights on the basis that some sex workers like their work is not ideal: no one asks you if you like your job if you work at Starbucks, a university or the Ministry of Health itself. Some sex workers don’t like their jobs, they still need to provide for themselves, their families, studies or other dependents or needs; just like anyone else who needs to work in any industry.”

Madison Missina, an Australian escort who has been working for 12 years, said it’s a shame the ad was pulled as it could have helped normalize sex work as a valid career path and option for anyone in a bad economic circumstance.

“I have seen society slowly move towards a more accepting attitude for workers who have no other choice,” she wrote. “However, there is still a great prejudice against those of us who choose sex work and are genuinely happy. I’ve noticed that when I and other happy sex workers speak out we’re told that we are unique and therefore not a valid representation of this industry. It’s almost as though the happy sex worker is more threatening because why we choose this.”