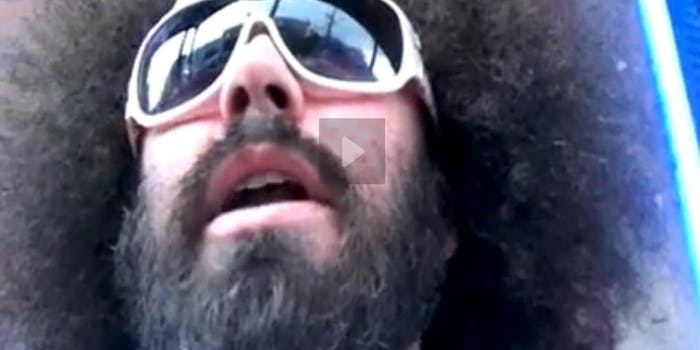 It’s not unheard of that a musician might take a popular album and transform it into electrical bleeps—like, oh, let’s say Floating Points’ 8-bit version of the new Daft Punk single “Get Lucky.” But to move backward in time, from electronic to acoustic, is far rarer.

Earl Scioneaux III’s version of that same song is being translated through the vernacular of New Orleans brass bands.

Scioneaux, also known as The Madd Wikkid, is a Nola music producer and the recording engineer for the traditional music Preservation Hall and its famous jazz bands. He has already used Kickstarter to arrange, score, and record an EP of Daft Punk tracks with a group of Crescent City brass players, including several members of the Soul Rebels, which he debuted at Preservation Hall.

This latest project of Scioneaux’s, Brassft Punk, has raised its helmeted head again. This time, he’s chasing not a Daft Punk “classic” but the early single off the French electronica duo’s upcoming album.

“I fell in love with the new single when they released it,” he told the Daily Dot. “It was clear this song was going to work really well for horns. It would be a missed opportunity not to do this, even though I was not really planning to do any more Brassft Punk, at least not anytime soon. But it was ripe for the picking.”

In three days Scioneaux has already raised almost $1,700 of the $2,000 he needs to score, hire musicians, and record his version. He hit the halfway mark in an hour after sending out an email to the backers of the previous project, which was funded for more than $20,000.

Like his first DP project, this one will also provide stems, or individual instrumental tracks, for remixing, a download and vinyl of the original EP.

A related project is a video Scioneaux wants to make. He’s trying to secure a license for the music and part of that process is providing Daft Punk with a copy of the music.

“I don’t know if the robots themselves have heard it, but it’s made its way to their camp.”

New Orleans has its musical partisans. Groups on both sides of the electronic divide are sceptical of the other. Scioneaux provides a bridge. His band uses the EWI (electronic wind instrument), a kind of synthed-up sax; his tuba player uses pedals.

“I hate to think we would lose the traditions,” he said. “But at same time you can’t preserve things and lock it in and say that’s it. There is room for exploring new frontiers. I make a point to involve myself in both.”

Part of that involvement is in the city’s festivals and parades. Today, Scioneaux was up ridiculously early for a Nola musician since he was heading out to run sound for the astonishing Theresa Andersson. And for next Mardi Gras?

“We’re talking about getting in on some parades,” he said. So if you’re down there next March, keep your ears up for a traditional brass band honking and blatting their way through Harder, Better, Faster, Stronger.