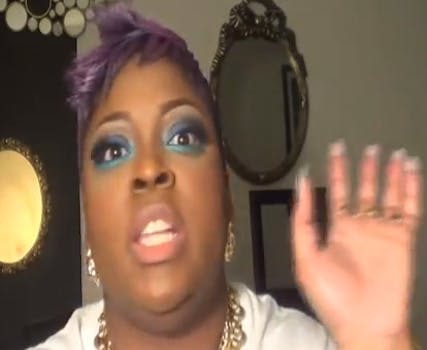 Keisha René Ervin just walked into her house and has not even taken off her damn jacket, but she just had to tell y'all about "Miss Brandy Norwood."

Keisha René Ervin just walked into her house and has not even taken off her damn jacket, but she just had to tell y’all that “Miss Brandy Norwood,” the iconic 1990s pop star whose brother happens to be Ray J, “just got her the fuck together, do you hear me?”

The singer was apparently “just swinging it from left to right and right to left” in her white T-shirt “and the tiniest booty shorts that you ever seen” at this show the other night, according to Irvin, playing all of the hits from her 18-year career, including “Baby,” “Best Friend,” “Missing You,” and “He Is.”

“I stand for Beyonce, and you all know that I go in for Miss B, but the only other B that has a place in my heart is Miss Brandy Norwood,” Ervin added to the rundown of hit singles. “I’ve been a fan of hers since she came out with “I Wanna Be Down.”

Evidently. This concert review, the first on a YouTube channel that’s seen 14 different videos, all of which detail either how Ervin applies eye makeup or what she thinks of Jay-Z’s kid, has attracted more than three times her channel’s total view count already.

And for good reason. The woman’s nuts about Brandy Norwood.

“She put all her critics to sleep,” Ervin says. “She put everybody in the motherfucking casket, and she gave us VOCALS—VOCALS, hunny, that Nicki Minaj, Keri Hilson, Ciara and any of those wackass bitches will ever be able to muster up in her lungs.”

Keisha, go tell em. You as cray as the rest.