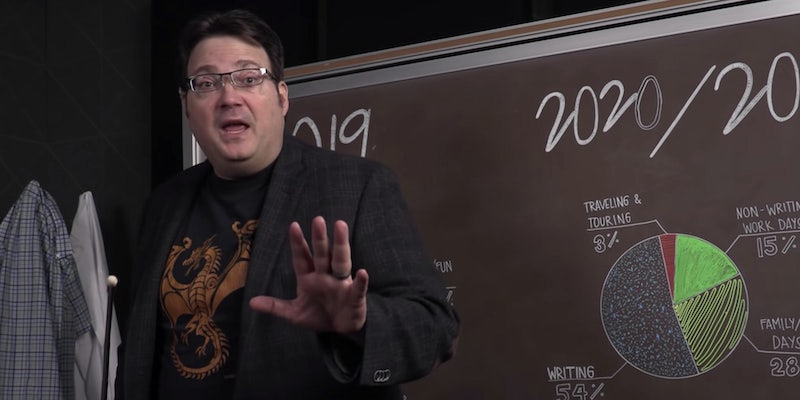 He's already raised $16 million—and has nearly a month to go.

Fantasy author Brandon Sanderson, who’s best known for helping shepherd The Wheel of Time’s final three books after the death of series’ author Robert Jordan, the Mistborn series, and The Stormlight Archives, launched a Kickstarter campaign for four brand new novels he wrote during quarantine, a feat that’s sparking memes directed toward both him and other famous fantasy writers.

In a 16-and-a-half-minute video and a Kickstarter campaign, both of which launched on Tuesday, Sanderson updated his fans on what he’s been working on in secret to everyone in his life except for his wife over the past two years. In pre-COVID times, he’d spend about a little more than a third of his time writing, about a third of his time traveling and touring, and the remaining time with everything else. But COVID changed the game, cutting out almost all of his travel and tour times, which left him not only more time to spend with his family but to write. Until late last year, not even his team knew he was writing.

Which, over the past two years, Sanderson says he wrote five novels, which he demonstrated by dropping stacks of paper on top of each other in dramatic fashion. One of the books (a middle-school grade book he may turn into a graphic novel) still needs to be worked on. But he’s planning to release the four other books over the span of a year in 2023.

“I might have gone a little overboard because I’ve written five extra novels in the last two years,” he said. “Look, I know. Don’t roll your eyes at me. You deal with isolation in quarantine in your way, I’ll deal with it in mine. We all handle stress differently, OK?”

Little is known about the four books, which are for adults. According to Sanderson, three of the books are related to the Cosmere, the fictional universe that most of his books are set in, and one of them is “something completely different.” Sanderson isn’t revealing the titles for now because he wants to offer readers the chance to go into something fresh and little information aside from knowing that it’s a book by Sanderson; those details will come later, partly through Sanderson’s YouTube channel. On his Kickstarter, he said it’s “kind of like going into a movie blind, never having seen the trailer, on the promise that it’s by a filmmaker you know you love.”

Sanderson asked for $1 million to fund his books and gave people the chance to obtain ebooks, audiobooks, premium hardcover books, and swag boxes. But in just one day, he’s raised more than $16 million raised and counting, and it’s already the most successful publishing Kickstarter. By the time the campaign ends on March 31, it could become the site’s most successful crowdfunding campaign of all time.

In the early days of the COVID-19 pandemic, people often brought up the point that William Shakespeare wrote King Lear in the middle of a plague, a mentality that people should use to create something new, so the fact that Sanderson wrote five books over the past two years (four of which will be in people’s hands by the end of 2023) is blowing some minds.

And naturally, people found a way to poke fun at two authors whose highly anticipated novels from their big series still haven’t been published more than 10 years after the previous iteration came out.

After the Kickstarter campaign crossed the $10 million mark, Sanderson expressed gratitude for the attention and level of success his campaign has already received.

Although the campaign hit a historical crowdfunding number already just one day into the campaign, it’s probably too soon to say for certain just how this might affect publishing overall. As author John Scalzi noted in a blog post about the Kickstarter, while Sanderson has a large fanbase who would support him, he and his team also did the work to make sure that the campaign he launched was sound and had the capacity to fulfill campaign promises.

“The numbers this Kickstarter is generating are large, but in the larger context of his career, his ambition and his work, not ultimately that surprising,” Scalzi wrote.