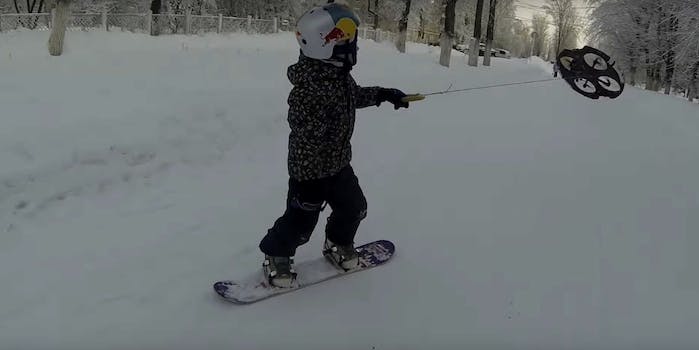 As drone technology becomes more commonplace, businesses and consumers are finding ways to use them that are far less invasive and deadly than conventional, militaristic methods.

Internet marketplace Amazon.com, for instance, plans to use drones to deliver products of five pounds or less in fewer than 30 minutes. Hollywood filmmakers, meanwhile, use drones to get nifty shots without spending thousands of dollars a day on helicopters.

All pretty cool, but not nearly as cool as a Russian dad who figured out an excellent new way for his son to get around in the snow.

In this first known video documentation of “droneboarding”—the use of a drone whilst on a snowboard—a small quadcopter seems to effortlessly pull a young boy through fresh powder. Smart if there aren’t any slopes nearby, but he doesn’t seem to be going very fast.

“I have a lot of quadcopters, all homemade,” the dad who shot the video explained in the YouTube description, translated via Google Translate. “Some are powerful enough to drag son but… has large, open screws. I could hurt somebody.” He added that while not as powerful as other drones of his, the one used in the video was “weak but safe.”

“If it had dragged faster,” he said, “it just would have fallen.”

That would not have been so radical.