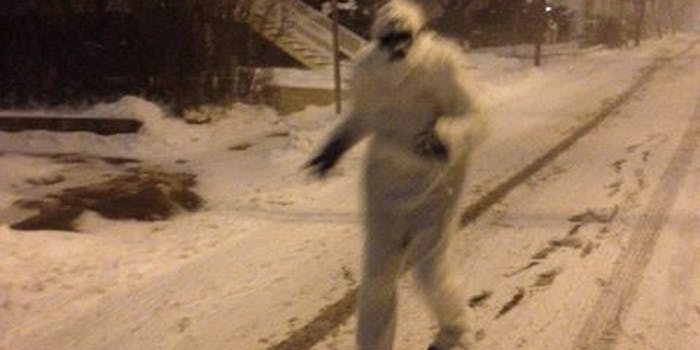 While Winter Storm Juno was pounding the Northeast, the streets of Somerville, Mass., a Boston suburb, were being stalked by a mysterious yeti. It was likely a bored prankster but it was definitely an actual large, hairy, roaming creature.

The Boston Yeti appeared on Twitter Monday (@BostonYeti2015) in preparation for his evening excursion.

The now-Internet famous yeti has grown an impressive social media presence since his debut Monday, with over 6,000 followers in two days.

The Boston Yeti was seen hailing a cab on the streets of Boston, which is funny considering drivers were banned from the roads in preparation for the superstorm. But it’s an optimistic yeti.

Check out this raw video of the Boston Yeti himself in his natural habitat.

Sadly it appears that the yeti is bolting town and closing out the gimmick, as it tweeted out goodbyes Wednesday evening.