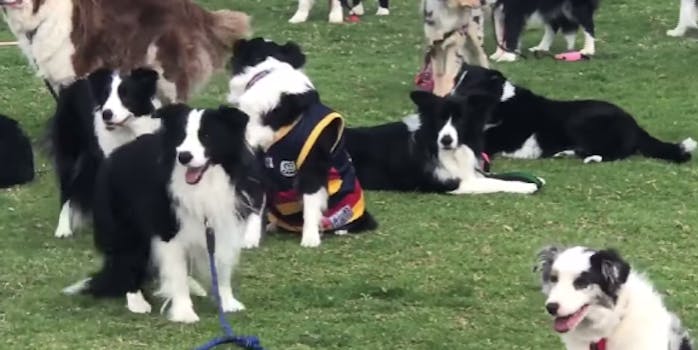 Assuming no dog-related phobias, who wouldn’t love a world record-setting meetup of more than 500 good little border collies? To be precise, it was 576 very good dogs gathered at a park in the south Australian suburb of Willaston, achieving what’s reportedly the biggest-ever group of border collies assembled in one place at one time.

Be forewarned: Anyone who has a soft spot for a field full of grinning doggos, tails all a-wagging and excited barks flying, may find themselves a little overwhelmed by this video. The event was reportedly organized by the Border Collie Owners of South Australia, or BCOSA for short. And it’s clear that the group isn’t playing around with its love of the breed.

One would be hard-pressed to find a bigger field more chock-full of adorable canines.  Border collies, according to the American Kennel Club, are intelligent, athletic, down to cuddle, and “eager to please.” Of course you can see all that in the video.

The event on Sunday reportedly bested the previous record for most border collies in a single place, which was 503. As Australian media noted, however, the folks at Guinness World Records do not recognize breed-specific dog-related categories, meaning this record won’t get any official recognition. From the looks of things, though, it will definitely live on in the hearts of the people who witnessed it.