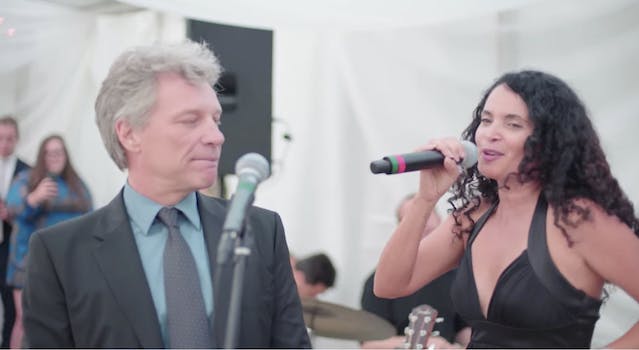 He said he didn't want to sing, but look what happened.

Jon Bon Jovi, who you may remember as a guest star on ’90s drama Ally McBeal, recently attended a wedding as a normal guest who didn’t plan to sing or make a spectacle of himself. But the band couldn’t resist cajoling him into singing one of his songs, despite his obvious reluctance.

It was awkward as hell, and the other wedding guests ate it up.

Lourdes Valentin and her backing band are pretty good as jazz wedding bands go, but you could see Bon Jovi’s discomfort growing as their cover of “Livin’ on a Prayer” went on. When she finally botched some lyrics—”and we’ll take it, I swear”—Bon Jovi couldn’t handle it any longer. He grabbed the mic and showed everyone how a real rock star puts on a pro forma show at a wedding he didn’t really want to upstage.

No one else seemed to mind, though. They all clapped and sang along instead of cringing. God, it was uncomfortable.

Valentin told the AP she was “very surprised” that Bon Jovi would “grace us with his talent.” Yep, no way to predict that playing one of his songs would pressure him to join in. Total surprise, there.

You’ve got to hold on to old rock gods. It doesn’t make a difference if it’s awkward or not. You’ve got Bon Jovi, OK, alright, don’t shove. He’ll give it a shot.