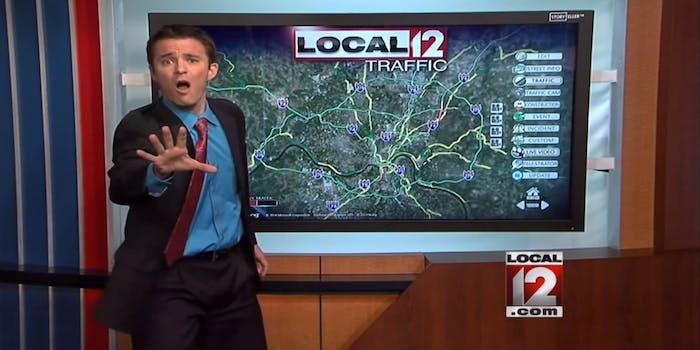 One local traffic reporter managed to get his message for his viewers to stay inside across in Disney-approved fashion.

Much of the country is still living in its own version of Frozen-esque hell, with no end (or Queen Elsa) in sight, but one local traffic reporter managed to get his message for his viewers to stay inside across in Disney-approved fashion.

After yet another snowstorm hit the Cincinnati area, WKRC traffic reporter Bob Herzog introduced his “Dance Party Friday” segment with a disclosure: he, like many of us, has seen Frozen in theaters with his daughter and has watched the various covers and parody videos on YouTube thousands of times.

One of the film’s songs resonated with him as a Traffic Man who has to report on the constant traffic jams and accidents that occur in winter. It’s a hard life when nobody listens to you and all the traction’s gone, but he’ll press on anyway. And who else will tell you about school closings and delays?

“I played it for my kids last night—not the video, but just the audio,” Herzog told his fellow anchors. “My son Sam just looked at me, and I think there was shame in his eyes.”

He might have just effectively ruined Frozen for his children, but it’s yet another small plight in the life of a Traffic Man.