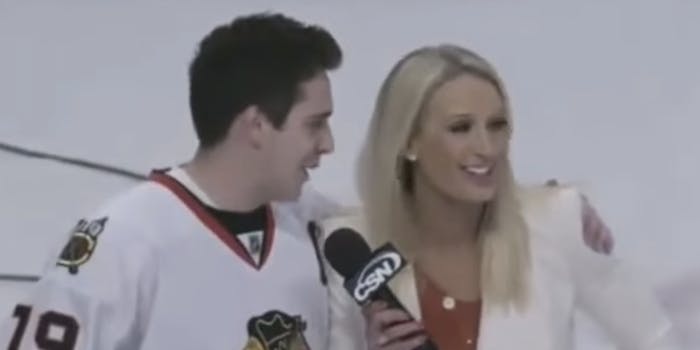 He shoots... he doesn't score.

“OK, Chad, you can do it,” Chad says to himself in the bathroom mirror at the United Center in Chicago. (Chad is a fictionalized version of the creepy, inappropriate man in the video.) He spits in his hand and flattens his hair, makes sure his Blackhawks jersey is on correctly. “Face in front, number in back.”

Chad’s practiced this line more than a hundred times. His bros commended him for his balls, or pucks, of steel. This was his one shot, not at shooting the puck between periods, but at wooing Sarah Kustok, sports reporter for the YES Network.

When his time came to step on the ice, he was cool and confident, his only worry was slipping. Always referring to himself in the second person, he mouthed, “Whatever you do, Chad, don’t fall. This is your only chance.” A representative guided Chad to the red carpet and instructed him to wait his turn before he could shoot the puck into a tiny slot to win a prize—a new car, free pizza for a year, a vacation perhaps.

“The plan’s simple, so long as you make these shots,” he thought to himself. “Sink the puck, win the prize, win sports report Sarah Kustok, the woman of my dreams.”

“Don’t blow this, Chad. You have one more shot.”

The final shot shared a fate with the previous two. A clear miss. “OK, you didn’t win the prize, but I can still court Sarah Kustok in the interview. Hockey’s hard, she’ll understand.”

“Judging by the sounds of the crowd, they didn’t go in, did they?” Kustok asked Chad. “No, they were terrible,” Chad admitted. He told Kustok about his days playing baseball in a last ditch effort to impress her.

“I don’t know if that really translates to a good hockey swing,” Kustok replied.

“No…” Nothing was working. By simply standing on the ice, a move Chad felt would entitle him to a date with the reporter, he was having no luck.

Finally, sensing the end of the interview, Chad said into the microphone, with thousands of fans watching, “I love you, Sarah. I love you. You’re so pretty and beautiful. I love you.” Surprised—flummoxed, even—Kustok simply thanked Chad, and was made visibly uncomfortable.

Chad walked down the red carpet, pleased with himself for bearing his heart to a woman he had only gotten to know in a professional capacity through the glass of a TV screen. Chad smiled at the zamboni driver, who gave him a thumbs up as he exited the ice.

“Nailed it,” he said to himself as he walked back to the nosebleed section, his pack of dawgs waiting for him with nachos in hand.

“Shit. You forgot to give her your number, Chad,” he remembered. “There’s always next season.”