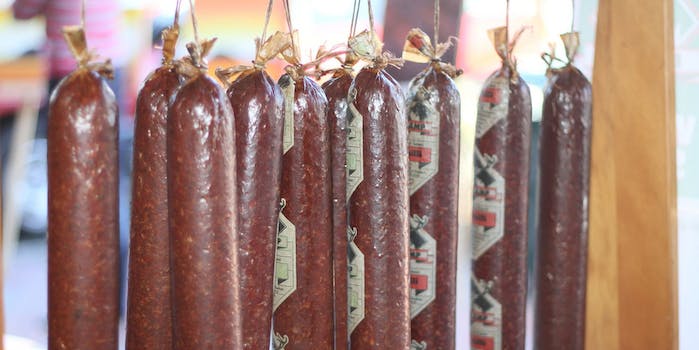 “BiteLabs grows meat from celebrity tissue samples and uses it to make artisanal salami.” So proclaims the copy on BiteLabs.org, right under an all-caps call to action: EAT CELEBRITY MEAT. The site proposes taking actual tissue samples of celebrities—specifically, James Franco, Kanye West, Jennifer Lawrence, and Ellen DeGeneres—and growing their cloned meat for use in a marketable salami blend.

But if it’s just a joke—as any half-concious participant in the age of viral marketing ploys and social media hoaxes immediately assumed it to be—then its creators are willing to take it pretty far.

The operators of the site, which was created last month, began its publicity push on Feb. 25. They fired a volley of tweets at celebrities and journalists (including me) proclaiming that BiteLabs was “the future of celebrity meat.”

Curiosity piqued, I headed over to the site, which explains how it plans to cultivate edible meat from cloned celebrity tissue samples: “Isolating muscle stem cells, we grow celebrity meat in our proprietary bioreactors.” Then, it’s time to prepare the stuff: “In the tradition of Italian cured meats, we dry, age, and spice our product into fine charcuterie.” BiteLabs also encourages you to tweet at celebrities in hopes of getting them on board.

Wanting to share a quick laugh with whoever was behind the stunt, I emailed BiteLabs. Instead of a winking reply, I got a series of lengthy, sincere responses that had obviously been written by someone who’d internalized Silicon Valley’s vernacular, but didn’t overtly appear to be mocking it. They were signed only ‘Kevin from BiteLabs.”

Read the full story on Motherboard | Photo by pbkwee/Flickr