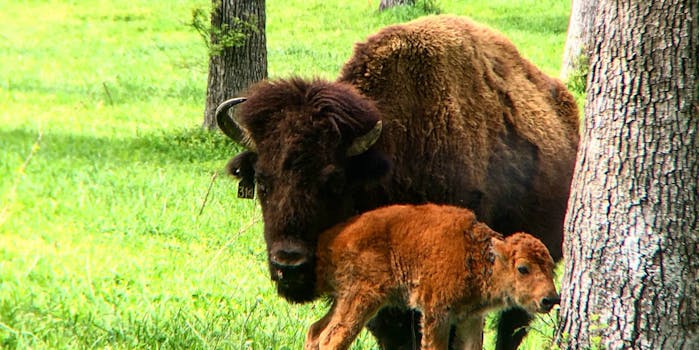 Photo via Land Between the Lakes KY/TN/Flickr

Won't look cold on a grill.

President Obama finally gave the American bison its due by declaring the delectable critter the national mammal.

You’d think this would bring about bison burger and rye whiskey specials to honor such a delicious pick. Those feasts are surely lurking somewhere, right?

What has instead made headlines is the misguided humanitarian efforts of people just trying celebrate the bison in their own special way.

A father-son duo traveled to Yellowstone National Park and told its rules to fuck right off when they approached a scraggly baby bison. Park visitors are supposed to stay a good 25 feet away from majestic beasts like bison.

The two tourists buckled the calf into the back of their car and inadvertently kidnapped it. Apparently, they thought it looked cold. They were legitimately concerned for the bison’s well-being, though he’d probably heat right up attached to a spit rotating over a campfire.

The pair received a ticket for their efforts and a stern talking to from park officials. The father and son may get their souvenir bison just yet. A woman in Texas is selling her half ton housebroken bison on Craigslist.

As of this writing, the ad has been removed. Tracking down a domesticated buffalo probably isn’t that difficult, though. Looks like somebody’s about to extend their vacation and go on a road trip.