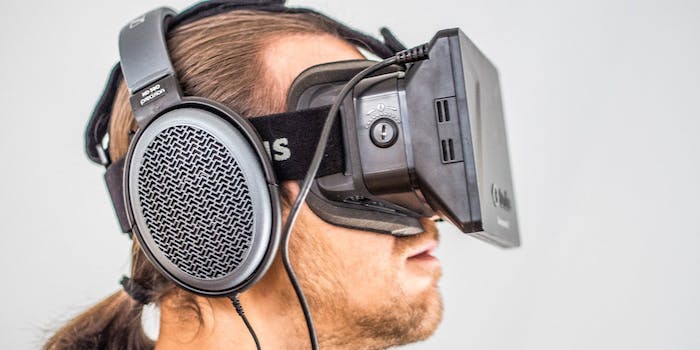 The biggest problem with virtual reality is us

Are we dreaming too big?

Are we approaching the dawn of the virtual reality age?

“You’re looking at the future,” declared Chris Cox, the chief product officer at Oculus VR, in reference to his company’s virtual reality headset being purchased by Facebook, “and it’s going to be awesome.” Recent reports indicate that the company is developing its own virtual reality version of the service, with the ostensible goal of “[bringing] social media to the world of VR” (at least according to Tech Times). But as virtual reality seems closer than ever before to mainstream viability, are we dreaming too big?

For example, take Monica Kim waxing poetic in a recent article for the Atlantic about how “one could have breakfast at the Louvre beside the Winged Victory of Samothrace, followed by a lunchtime spelunk through Thailand’s water caves” before noting, as virtual reality prognosticators are wont to do, that “if virtual reality becomes a part of people’s day-to-day lives, more and more people may prefer to spend a majority of their time in virtual spaces.”

While I may personally hope Cox and Kim are right, it is important to maintain an attitude of healthy skepticism toward optimistic predictions about virtual reality. Like flying cars and casual space travel, virtual reality is one of those technological advances that has long been promised but never winds up being brought to full fruition. If Facebook actually succeeds in making virtual reality a part of the average consumer’s life, it will have bucked a trend that has been in place for at least two decades. Of course, this is a big “if,” and as we attempt to anticipate the major technological advances to come, it’s a good idea to avoid jumping the proverbial gun.

Part of the problem with virtual reality is that the actual experience has never been as appealing in practice as it seemed it would be in theory. Kyle Fowle detailed the reality of experiencing VR in Kill Screen: “Stepping into the pod, though, shattered any illusions. … Three minutes later you stumbled out of the pod, an attendant wearily guiding your now vertigo-ravaged body away from the machine, praying that your vomit would subdue itself until you rounded the corner to Cinema #8.”

The problem was, as Matthew Schnipper writes in the Verge, that “though a true believer could immerse him or herself in the roughly built digital landscape, the chasm between that crude digital experience and the powerful subtly of real life was too great.” In short, “the vision simply did not match the means.”

From a sociological perspective, this can be attributed to a phenomenon profiled in the Gartner Hype Curve. “The Gartner Hype Curve communicates that there are ‘technology triggers’ that lead to new opportunities and possibilities,” writes Dr. Mark Bolas of the Institute for Creative Technologies. As creative people in the sciences and arts imagine the possible manifestations of a particularly promising technology, hopes are inflamed beyond what existing scientific capabilities can deliver.

“This all leads to growing anticipation resulting in a climb to the ‘peak of inflated expectations,’” Bolas continues. “This was VR in the 1990s. When issues like technology limitations, costs, and other issues begin to deflate those inflated expectations, there is a slide down to the ‘trough of disillusionment.’ This is where public sentiment has been towards VR for the past several years.”

This doesn’t mean that we can’t make any predictions about the future use of virtual reality. It simply means that we need to be more modest and realistic when it comes to those projections about which we’re especially certain. According to “Killer Apps in the Gigabit Age,” a new report published by the Pew Research Center and Elon University, the most interesting potential uses for virtual reality would occur in health and education.

“Business and economics professor Ed Lyell suggested that teachers will become less talking-head experts, and more ‘teacher-coach’ figures for their students,” writes Stuart Dredge of the Guardian. “Healthcare is a major topic for the report, with its predictions of ‘continuous health monitoring’ through a variety of sensors and personal devices.”

As virtual reality seems closer than ever before to mainstream viability, are we dreaming too big?

There are two additional lessons to be gleaned from our spotty history with virtual reality. The first is that it’s important to factor human nature into our understanding of technology and the predictions we make about them. In the case of virtual reality, a common mistake seems to be assuming that people will automatically find something appealing about an entertainment technology that offers total visual and auditory immersion.

While there are plenty of men and women who use their entertainment options as a means of escaping from their real-world lives, the virtual reality experience can be uncomfortable and distracting instead of seeming like an actual, viable alternative to, well, reality. Of course, this doesn’t preclude the use of VR for practical reasons, like supplementing classroom lesson plans or providing patients with more comprehensive diagnoses, but it is more of a leap to assume people will choose such a disconcerting sensory experience for leisure activities.

Similarly, we need to remember that futurists are notoriously hit-and-miss when it comes to the accuracy of their forecasts. For instance, when a 2012 Forbes article analyzed a dozen of the major predictions made by popular science writer Ray Kurzweil, it found that he was flat-out wrong two-out-of-three times. From predicting that the majority of text would be created using continuous speech recognition and that “human musicians [will] routinely jam with cybernetic musicians” to asserting that the tech bubble of the ‘90s (which fueled the unprecedented prosperity of that decade) would last indefinitely, Kurzweil was plumb wrong with embarrassing frequency.

When he erred, most of his mistakes were the same as those who have been overly-optimistic about VR: He went too far in guessing how much people would accept technology as a substitute for direct human activity.

While it will probably prove unpopular to be a wet blanket on the burning dreams of the VR enthusiasts, it is undeniably necessary to remain cautious even in our optimism. Advances in digital technology have so revolutionized our lives that it’s easy to get caught up in a wave of irrational mass excitement over what is perceived as the next big thing. Instead of succumbing to these impulses, we should instead refer to an old cliche that seems oddly appropriate for this topic: Believe it when you see it.