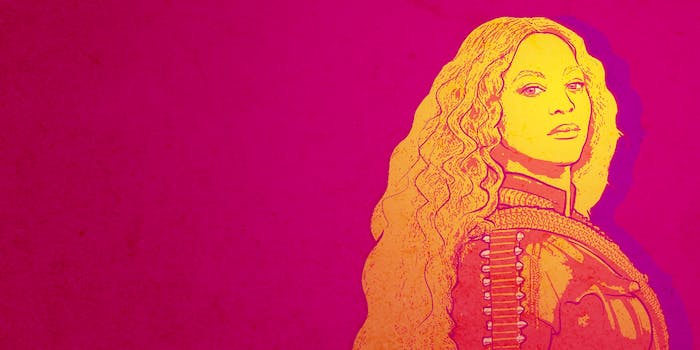 Music can be a force for change—and Beyoncé knows that

Beyoncé isn't the first artist to use music to incite change in the world.

“You know you that bitch when you cause all this conversation.”

The 34-year-old singer, songwriter, actress, dancer extraordinaire known as Beyoncé Knowles can do it all. And while Beyoncé tends to be universally praised, some people have criticized the performer’s latest hits.

Anyone who owns any form of technology or has a social media account probably saw at least a snippet of the artist’s latest visual album Lemonade, which aired on HBO Saturday night. As expected, many were quick to react to Beyoncé’s work. Twitter erupted with various GIFs, quotes, and reviews of the emotional rollercoaster Beyoncé took her viewers on in the hour-long video. However, as with many highly publicized spectacles, the reaction quickly turned sour. In early February, Beyoncé’s song “Formation” had critics up in arms for its political message, and Lemonade evoked similar responses.

I’ve seen everything from praise of Queen Bey to people calling the racially motivated message in Beyoncé’s songs “fake.”

With Beyoncé’s newest songs there has been a pattern—literally anything she says regarding black culture and feminism is met with backlash, and I don’t understand that. It’s frustrating that people can’t let Beyoncé have an opinion. It’s annoying that many artists before her have used their music as a means of making a point, but when Beyoncé does it, it’s suddenly a problem.

In an editorial titled, “Jay-Z’s not the only one who needs to be nervous about Beyoncé, the born-again-black woman with a political mission,” British journalist and TV personality Piers Morgan explains his disdain of entertainers that decide to “go political.” Morgan claims to miss the “old Beyoncé,” one who is moving away from her light-hearted, uncontroversial dance jams and taking a dangerous turn into music with a “far more serious deeply political and race-fuelled tone.” Morgan goes on to question Beyoncé’s intentions by calling her a “militant activist” and claims she’s “exploiting’ the BlackLivesMatter movement through Lemonade by including clips of black mothers whose sons were killed at the hands of police brutality.

Music with a political message is certainly not new.

Why can’t Beyoncé take a stand and be vocal about it? Isn’t that what music is often all about?

Music with a political message is certainly not new. In the 1970s, anti-war music was rampant. The late John Lennon wrote songs such as “Give Peace a Chance,” which quickly became the anthem for various counterculture movements. Another popular hit, “War,” by Edwin Starr, also had strong political undertones during the Vietnam War. In 1988, N.W.A. released their iconic song, “Fuck tha Police,” a ballad that brought to light various social issues, including racial discrimination by cops and police brutality. While their music received backlash from those who thought their message was too explicit or had the potential to incite violence, they also helped bring national attention to certain injustices they dealt with as black men in America. Politically motivated messages are also common in country music, as seen in “Courtesy of the Red, White and Blue,” a song by Toby Keith that helped unite the country and had a strong message to any other country that wanted to attack the United States following 9/11.

Music has always been a method of inciting change, and Beyoncé is no exception.

Thanks @Beyonce for using your platform to be a social engineer for change! #BlackLivesMatter https://t.co/8KEBlx9gmG

Fortunately, we’re still living in a time where we have strong, black artists who aren’t afraid to voice their opinions and tell their listeners their thoughts on what it’s like to be black in America. As many artists before her, Beyoncé is using her music to unapologetically be herself. For those who have a problem with the political undertones in Beyoncé’s songs, I can only assume you don’t like her new music because, well…it wasn’t written for you.

“When [Beyoncé] sings ‘Who run the world—girls!’ the girls she speaks of are an amorphous, ever-changing group, racially-ambiguous, of no specific social class, but Formation felt different,” Huffington Post culture writer Zeba Blay noted after Beyonce dropped Formation.

Blay continues: “With its nods to New Orleans, its imagery invoking the realities of police brutality, its celebration of black gay ballroom culture and the Black Panthers, Beyoncé’s latest single is perhaps the most straightforward expression of her blackness.”

Anyone who has watched the videos for both Formation and Lemonade can see that Beyoncé is a proud black woman with a strong point of view—and that shouldn’t be a surprise. Beyoncé made a name for herself early on, making headlines in the early 90s as a star in Destiny’s Child and she continues to dominate the music industry to this day. I can understand the conventional messages behind her older songs, but did everyone expect Beyoncé to only write about sex, boys and breakups for her entire career?

For anyone who hasn’t noticed, Beyoncé has a large, loyal following. And whether you like it or not, more people listen to hear what she has to say than some of our own political leaders. For someone who has only tweeted nine times, she has 14.2 million followers, more than most politicians and powerful CEOs.

So if you’re upset or uncomfortable with Beyoncé having a voice her songs, I’m afraid I’ve got some bad news: Queen Bey, her impact, and her pro-blackness are here to stay.

Alexandra Samuels is a third-year journalism major at the University of Texas at Austin. She is a breaking news correspondent for USA Today College. She enjoys discussions on race, politics, sexuality, and Chance the Rapper. Follow her on Twitter @AlexSamuelsx5.