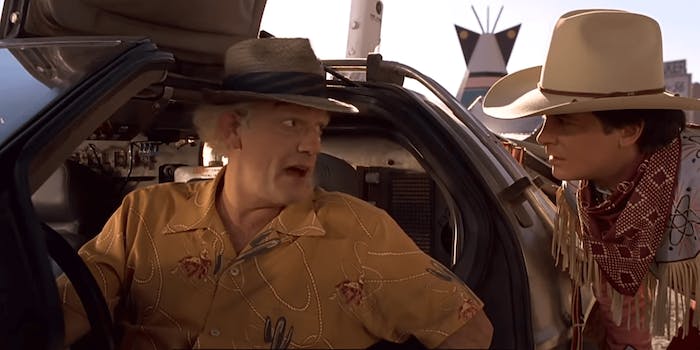 Time travel, like spaceships and zombies, is a perennial favorite of the sci-fi genre. We’ve put together a list of our favorite time travel movies, from obscure indie rom-coms to blockbuster action hits.

Sorely underrated due to its marketing as a generic Tom Cruise action movie, Edge of Tomorrow is considerably better than it looks. For starters, Emily Blunt’s character is more heroic than Tom Cruise’s role as a weaselly PR guy, who is accidentally drafted into active service during a full-scale war against alien invaders.

Edge of Tomorrow follows a Groundhog Day idea where Cruise has to repeat the same day over and over again, gradually learning the right alien-fighting skills from Emily Blunt’s military hero character. Heavily inspired by the structure of classic first-person shooters (including respawning characters and a boss villain at the end), it’s a better video game movie than most films adapted from actual video games.

The Terminator franchise kind of went off the rails in recent years, especially its convoluted time travel storyline, but most fans regard Terminator 2 as the peak. Arnie returns as the title character, switching from villain to hero in one of James Cameron’s most iconic action films.

Keanu Reeves was already working steadily throughout the mid-1980s, but Bill and Ted is what really put him on the map. This stoner comedy about two time-traveling teens quickly became a cult classic, spawning a sequel and plenty of quotable lines. From a critical perspective, Bill and Ted is probably the least “good” film on this list, but there’s something pure and beautiful about it, even now.

This fun and idiosyncratic indie film was, amazingly enough, based on a true story. For the full backstory we recommend listening to the Reply All podcast episode “The Time Traveler and the Hitman,” but the basic gist is this: In 1997, a guy wrote a joke classified ad for a time travel companion, and people actually started to reply, many with serious plans to travel back and undo their past mistakes.

The idea was so appealing that screenwriter Derek Connolly adapted it into a movie script, which was directed by Colin Trevorrow—beginning Connolly and Trevorrow’s rapid ascent from total obscurity to making films like Jurassic World and Star Wars IX.

Safety Not Guaranteed stars Aubrey Plaza as a magazine intern who is sent to investigate the classified ad, and ends up befriending an eccentric wannabe time traveler played by Mark Duplass.

This mid-2000s rom-com is a hidden gem of the surprisingly popular time travel romance subgenre, whose other hits include Groundhog Day, The Time Traveler’s Wife, The Lake House, and Kate & Leopold. Jennifer Garner stars as a dorky 13-year-old who wishes she was 30, only to find her wish come true as she’s transported into the body of her 30-year-old self, a high-flying magazine editor. Mark Ruffalo co-stars as her childhood friend and love interest, who grew up to become a photojournalist.

The best word to describe 13 Going On 30 is “charming.” It’s the kind of film you don’t expect to be good, but is. Jennifer Garner is especially engaging as a 13-year-old trapped in an adult woman’s body, leading you to hope for a post-Affleck divorce comeback.

Rian Johnson‘s Looper has an interesting link to the next movie on this list, because Primer‘s writer/director Shane Carruth was hired as a time travel consultant for Looper. How’s that for a job title?

While Looper is nowhere near as intricate as Primer, it meshes a more Hollywood-friendly futuristic sci-fi story (a young hitman, Joseph Gordon-Levitt, is faced with the task of assassinating his time-traveling older self, Bruce Willis) with some clever and original usage of time travel as a plot device. One particular scene will stick with you forever, as you see someone’s life changing in “real time” as a result of events being altered in the past.

From a technical perspective, Primer may be the most complex and thoughtful travel movie ever made—if not the easiest to follow. Filmed on a microscopic budget and essentially homemade by Shane Carruth and his friends, it tells the story of a group of tech guys who build a working time machine in their garage. Instead of going on wild adventures, they carefully test the machine’s capabilities, although something inevitably does go wrong.

Primer’s story of branching and looping timelines will probably inspire you to google a diagram after you watch, but you should definitely avoid spoilers beforehand.

Star Trek IV is the third part of the Star Trek trilogy that began with The Wrath of Khan, but it’s also great as a standalone movie. On their way home from the events of Star Trek III, the Enterprise crew discover that the Earth is in danger—and the only way to save it is to find some humpback whales to communicate with an alien probe. The only problem: Humpback whales are extinct.

This unabashedly bizarre premise leads the crew (then in their 50s and 60s) to travel back to 1980s San Francisco, so they can kidnap a whale and bring it back to their present day. It’s a film that would never get made in today’s creatively conservative Hollywood climate, but the Star Trek franchise is better for it. It’s also welcome reminder that the original series crew were often at their best when playing comedy.

Starring a 20-year-old Jake Gyllenhaal—long before his current career as the star of Oscar-bait movies and action blockbusters—Donnie Darko is the quintessential cult indie movie. It’s more psychological horror than sci-fi, telling the story of a teenage boy as he wrestles with hallucinations and visions of an oncoming apocalypse in 1980s suburbia.

1. Back to the Future

Do we really need to explain the necessity of Back to the Future? It’s basically the ultimate time travel movie, made during Hollywood’s peak period of family blockbuster entertainment. Q.E.D.