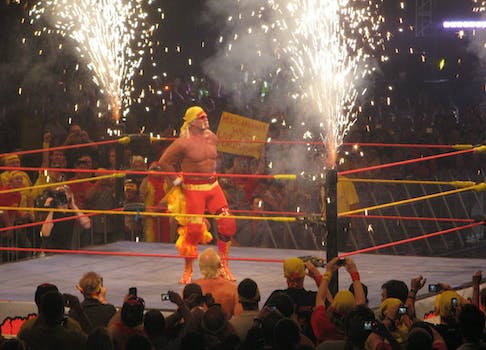 This is getting intense, brother.

If the O.J. Simpson murder charge gave us the trial of the century, then wrestling legend Hulk Hogan‘s $100 million lawsuit against Gawker for publishing a secretly recorded video sex tape has the potential to become the trial of the millennium.

That’s due in part to the far-reaching ramifications of how First Amendment rights play into the central narrative: Gawker’s lawyers claim that Hogan’s public status and candor about other sexual escapades made posting the video fair game.

But let’s be real: What really makes this legal battle so Michael-Jackson-popcorn-GIF-worthy is that it’s Hulk Hogan (née Terry Bollea) suing someone over a sex tape. In Florida. And did we mention he’s having sex with the wife of a radio DJ known as Bubba the Love Sponge?

And even though it’s far from over, the trial has already offered up a slew of iconic moments. Let’s review the very best (to date).

The court questioned hundreds of jurors over several days—and what a wild, wacky, painfully honest bunch they were.

Judge warns jurors against going online. Says several, when asked if they could stay off the Internet, simply said "no." #hulkvsgawk

Male juror says he watched an edit of sex tape.
Where?
“I couldn’t tell you the website. Someone was like check this out." #hulkvsgawk

Juror says she saw Hogan on a flight to NY. He was sitting in first class. “I just patted him on the shoulder and walked on by.” #hulkvsgawk

Juror who said it was "not right" that some people can use the n-word & some can't is not excused. She'll return this afternoon. #hulkvsgawk

Female juror on Hogan sex tape: "Do I want to look at it? No. Am I willing to, as a citizen? Yes.” #hulkvsgawk

Attorney: Do you follow wrestling?
Juror: “Yeah, when it was real back in the day." #hulkvsgawk

(Though it’s also worth noting that the lawyers had to ask some fairly ridiculous questions.)

Opting for a formal black bandanna and prominent cross when appearing in court, Hogan has struck a look that recalls his days as Hollywood Hogan, when he led the New World Order, a (gimmick) insurrectionary group of wrestlers who threatened to subsume World Championship Wrestling and later World Wrestling Federation (now World Wrestling Entertainment).

It looks like nWo Hulk Hogan showed up for court today. #HulkvsGawk pic.twitter.com/VkJVIg3b31

“Hulk Hogan” is a fascinating personality insofar as it’s total fiction that continues 24/7—and on the witness stand, Terry Bollea admitted as much. In testifying about a sex tape and invasions of privacy, it’s only natural that genitalia would come up. When it did, the world learned something revelatory about the difference between Hogan’s dick and Bollea’s.

Lawyer: "So you were discussing Hulk Hogan's penis?"
Bollea: "Yeah, because Terry Bollea doesn't have a 10-inch penis."

A.J. Daulerio, Gawker’s editor-in-chief at the time of the fateful 2012 post, which he authored himself, gave a pretty weird answer in his deposition.

Anyone with a sex tape starring a famous 5-year-old, go ahead and send it to [email protected] The FBI will be with you shortly.

(OK, this reading isn’t quite fair to Daulerio, who was likely just defaulting to snark—no need to go full #Gamergate on him, fellas.)

The man has lived, by most accounts, a scandalous life, marred by headlines about his alleged racism, domestic abuse, and drug addictions. Somehow, amid all those exposures, his admission that he didn’t know how to use email in the year 2012 is the most jaw-dropping.

Hulk Hogan just admitted he "didn't know how to email" in 2012. #HoganVsGawker

Max Read, Gawker’s editor-in-chief from March 2014 to July 2015, was a staff writer at the time of the Hogan sex tape post. He made a silly joke about it in Campfire, the software he and his co-workers used to chat throughout the day. That joke then had to be “explained” in a court of law, and Read was a trifle embarrassed about it:

I worked at Gawker in 2012, but wasn’t involved in creating the story, so I’m not named in the lawsuit, nor was I deposed as a witness. But I did make jokes that involved Hogan in one way or another in our internal chat at the time. And now the whole world knows how corny I am.

The joke, which was the subject of a rigorous back-and-forth between [former Gawker editor-in-chief] John [Cook] and the opposing counsel, went something like this: Someone referred to the Hulk Hogan sex tape as “tender.” I wondered aloud if it also contained a leg drop (a famous pro-wrestling move) — a “tender leg drop.”

I can’t be much more specific than that, because I have no memory of making this joke. “Jokes I made to co-workers in 2012” is not a category I store prominently in my memory palace, though I love those co-workers and assure you that most of my jokes were much better. This is a scary realization: Hulk Hogan’s lawyers have a better sense of many conversations I had in 2012 than I do.

7) The withering shade of Nick Denton

When asked if he was at all enthusiastic about getting ahold of the Hogan sex tape, a guaranteed traffic bonanza for the site, Gawker Media founder and overlord Nick Denton said he was more into a scoop about a college football player getting catfished. Ouch.

“I wouldn’t say I was that excited," Denton says of getting the Hogan exclusive. "I was really more excited by the Manti Te’o story."

Granted, none of this actually happened—but we can dream:

"Back then the WWF told fans I didn't know how to take my shirt off. So I had to tear it off every time—like this." pic.twitter.com/OFrxTnIQsc

"I'd say the Bible passage that speaks most to me is Cain and Abel. Tragic. It's how brother slew brother, brother." pic.twitter.com/J2YnqIWU5G

"Every Tuesday at Fresh Market it's half off ground beef. That's 2-for-1 on hamburger—and the whole thing's legal." pic.twitter.com/GXTox5JKfm

"That second Big Beef 'N Cheddar? It can seem like a good idea… But lemme tell ya somethin', man: it bites back." pic.twitter.com/rKcTTt3QFr

"When you do Create A Wrestler in the game, you can make the wiener big as you want. It rules, but it's messed up." pic.twitter.com/WM1yRPyADF

"A 6" won't cut it. At a party, you want a party sub. In segments. But don't get it too thick, because of messes." pic.twitter.com/Hpf8W4k9kY

"Why would Fresh Prince cab from LAX to Bel Air? He doesn't have a budget for that, brother. It doesn't make sense." pic.twitter.com/Z366RENZGy

"Guy asks if I ever went to France. I say, yeah, brother. So he pours me 8 shots of vinaigrette & says 'Prove it.'" pic.twitter.com/mwIOT0LOR0

Brutus “The Barber” Beefcake, a wrestler and friend of Hogan’s, in 2011 vowed to sue Hogan’s ex-wife for claiming that the two men had indulged in a homosexual affair—a claim she later retracted. Seems the Gawker legal team wanted to draw some parallels between that incident and the case currently under review, but Hogan’s lawyers were not having it.

Let the record show that a courageous attempt to drag someone called “Brutus Beefcake” into this circus was smacked down with extreme prejudice. A tragedy for scholars of law everywhere.

Photo via Mike Kalasnik/Flickr (CC BY 2.0) | Remix by Max Fleishman