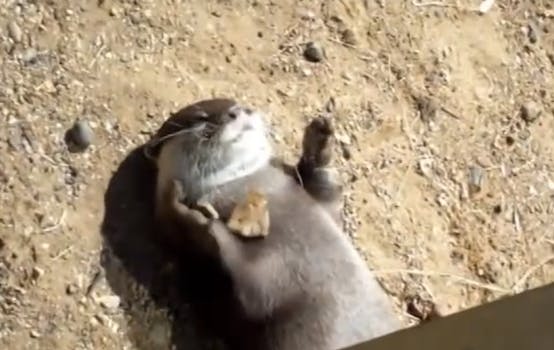 This man gives voices to the voiceless.

Ever wonder what animals are really thinking? As always, YouTube has you covered.

For the past four years, Chris Cohen has been taking adorable animal videos and narrating their subjects’ inner monologues, imitating their speech patterns to explore their motivations, hopes, and anxieties. We’ve rounded up some of the best videos from his repertoire of chatty creatures.

To be fair, “magic” is a pretty loose term here, but at least this otter is trying. His magically-appearance-rocks act relies mostly on charm and his audience turning a blind eye to his sleight-of-paw, but he’s an otter, so of course we forgive him.

These two penguins are faced with a real puzzle. How do they get across the “river” before them? The first penguin figures out a narrow path through safe terrain, but the other one simply puffs out the chest and makes a leap for it. You just know the braver one will never let his friend hear the end of it.

This cat is living our nightmare: The printer won’t take the paper, and all you can do is bat at it relentlessly until you lose all sense of balance and fall off the counter. We’ve all been there, cat. Better luck tomorrow.

This puppy isn’t refusing to leave the house out of embarrassment. His problem is bigger than a bad fashion statement: His new shoes make it impossible for him to walk with any dignity. When he does get going, however, he’s pretty much unable to stop.

Cohen’s most recent addition to the Animal Translations canon sees this cat giving a soothing head massage to a dog, all the while purring suggestions into his ear. The cat starts off small, curing the puppy of his tennis-ball habit, but then he gets greedy and demands all of the dog’s biscuits. Unfortunately, his scheme backfires.