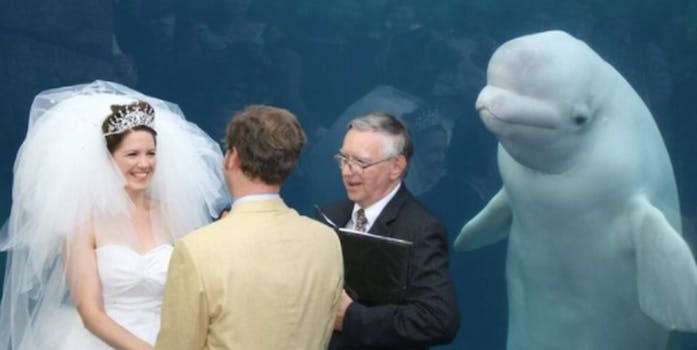 Beluga whale crashes wedding and gets the Photoshop battle it deserves

These are the pictures they'll show their grandkids.

If you take your wedding photos at the aquarium, there’s no knowing who might show up. Certainly, you might expect some beautiful and majestic creatures to swim by in the background. After all, that’s the reason you’re there.

But you might not expect one of them to solemnly join in the ceremony as if it’s giving away the bride.

This couple must have been thrilled to have such a unique photo to share with their friends—just not as thrilled as the redditors who got ahold of it and created another classic Photoshop battle.

Here he is as the best man:

Taking the place of the bride:

Regretting that he never spoke up when he had the chance:

And here’s the whole thing taking place in an alternate universe:

Bonus points for changing the reflections of the guest in the glass.

If the scene looks a little familiar, it might because a couple had a similar experience back in 2013. Apparently beluga whales just love weddings. In fact here’s one offering some a girl a ring:

A beluga whale blows a bubble ring at a girl

Make sure to check out the entire gallery on Reddit.