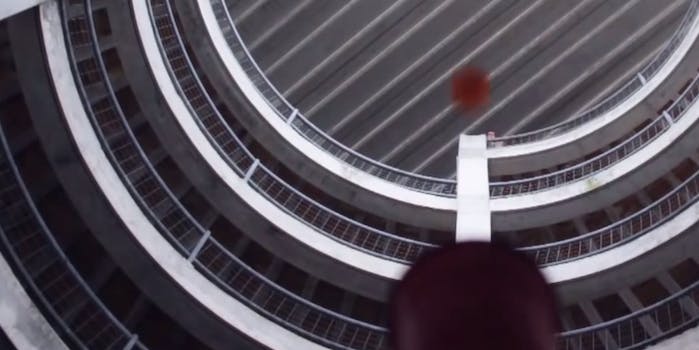 Scope this last shot: That’s a six-story drop that falls right into the cup.

Dude Perfect does trick shots, sure, but does Dude Perfect party? No! Not at all. Those guys love faith and community and doing good things for other people. They can’t be bothered with any type of trick shots that involve a ping-pong ball and a single, solitary red solo cup.

That’s where Wellington, New Zealand, native Harry Wright and his unnamed flatmate come into play. The two college-aged dudes just released a video that finds them executing 2:34 of insane beer pong trick shots, some of which occur on an actual beer pong table and the rest of which only pertain to the party-based sport in the sense that they involve the aforementioned white ball and red cup.

The shots are pretty remarkable when you consider how many of them happen outside, in the open air, where a gust of win could move a ping-pong ball a good distance. Scope that last shot, for example: That’s a six-story drop that falls right into the cup.

Wright and his partner say the video was made as their entry clip for ESPN’s Trick Shot Your Way to the NBA offering, a contest, if selected, could earn the two flights to New York to see the Knicks play a game, along with a whole slew of other amenities ranging from hang time with former player Jalen Rose and dinner at Jay Z’s 40/40 Club.