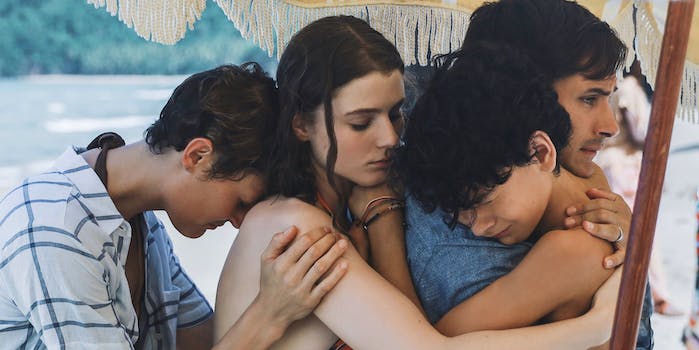 ‘The beach that makes you old’ is more than just an M. Night Shyamalan plot—it’s a spicy meme

If you heard the phrase “the beach that makes you old” just a few weeks ago, you might’ve thought that it was a silly over-reaction to getting pruney fingers or a bad case of sunburn after a trip down the shore. But thanks to M. Night Shyamalan’s latest hit, it’s not only the plot of his new movie but also the subject of an absurdist meme.

In Old, a family of four travels to a remote resort for a vacation, but it doesn’t take long for it to become a deadly vacation. The hotel manager tells them about a private beach, and when the family arrives, other people are there, but nobody can leave—and all of the people on the beach are rapidly aging; for example, the kids become teenagers very quickly while the adults start to gray and get wrinkles. We won’t spoil how exactly Old shakes out, but if you want to know the film’s big twist and don’t want to wait until you can see Old in a theater to find out, Slate and Vulture are among the places that have you covered.

But even with the twists and turns that Old takes and its growing pile of dead bodies, there’s just something inherently funny about the summation of Old’s big centerpiece, a.k.a. “the beach that makes you old.” It’s true: Old does take place at a beach that makes its characters old. But it’s also the kind of thing that sounds made up.

And, as more people watched Old and talked about the movie online, it became something like a ubiquitous punchline, one that works even if you haven’t seen Old.

You could incorporate other shows, movies, and cultural touchstones to illustrate the effects that Old’s beach would have on a person.

It even makes for a great existential lead-in.

And of course, there are a few people—like Paul Rudd—for whom Old’s beach might not work the way we imagine.

Old made $16.5 million over the weekend, putting it at the top of the U.S. box office. As it turns out, a lot of people tuned into the beach that makes you old.