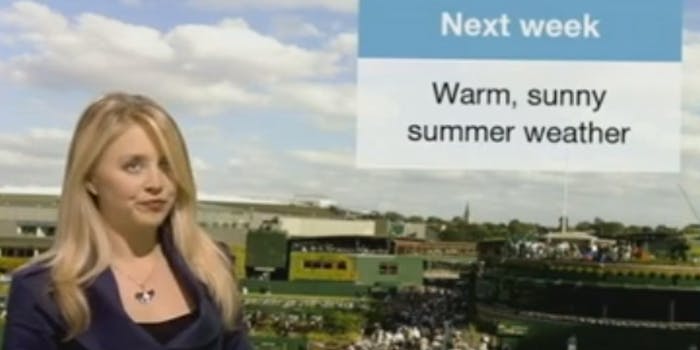 The eye roll that launched 1,000 tweets

Many of us roll our eyes when annoyed, but few can do it with true artistry, on live television, in a manner that captures a country’s attention. That’s just how good BBC weather forecaster Wendy Hurrell is at expressing silent, frustrated disbelief.

Shortly after her 10:30pm segment Monday night, in which she promised warm and sunny weather for London in the coming week, Hurrell—believing the camera had cut away from her and back to the program’s host, Riz Lateef—could be observed to drop her professional smile, flip her blonde hair, and swivel her eyeballs about like a teenage nihilist.

It’s the transition from beaming broadcaster to exasperated employee that sells it:

On Twitter, speculation arose that Hurrell was expressing disgust with Lateef as the eye roll gained viral traction.

Soon enough, however, Hurrell and Lateef put that rumor to rest, confirming their continued friendship. They blamed Hurrell’s flash of contempt on technical issues during the broadcast.

The roll of the eyes was because I had to do the whole forecast without being able to see any graphics – it wasn’t at @RizLateef! #techfail

Whether the two women have just defused a tabloid storyline about some dark rivalry, or Hurrell was simply grinning and bearing the indignity of a fouled-up graphics display, you have to admire the professionalism involved. Even the eye roll goof—which Hurrell later compared to a bit from the Will Ferrell movie Anchorman—was impeccably done. Her fans agreed:

Here, for your ongoing pleasure, is our GIF version, suitable for all too many occasions: