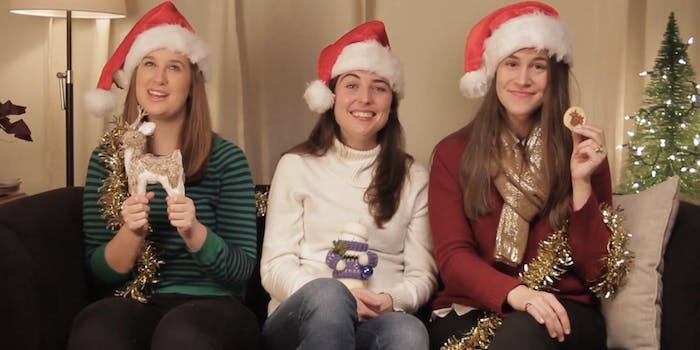 Buy her a Starbucks gift card—oh, and restrict international travel to women only.

The plight of the “basic bitch” has been much-discussed in 2014, so one comedy troupe decided to create some holiday content around what to buy the most basic woman in your life this time of year … all the while imparting an increasingly aggressive list of feminist demands.

You may think you’re just watching a list of boring presents to buy a boring person in your life, but blink and you’ll miss the flashes of white text on a black screen that start off with pretty basic feminist-centered ideals, like “Women give birth to men” and “Female lions are the hunters.” However, as the video goes on, it spirals into increasingly frequent suggestions of “all men denied healthcare” and “no coats for boys.” All the while, the women are adding more basic items to the gift guide: a chevron rug, a juicer, and 50 Shades of Grey.

It culminates with the ultimate demand: “all men kept in cages in 2015.” It’s a resolution any basic b can get behind.