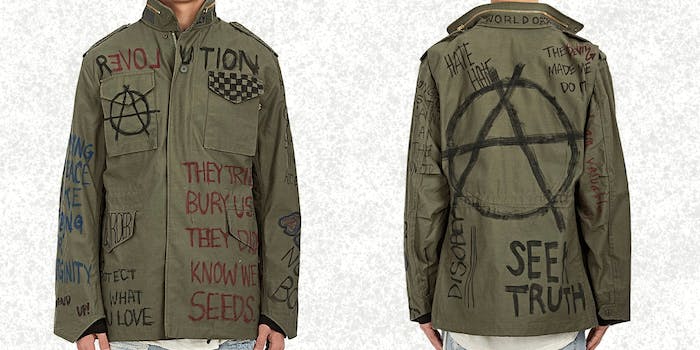 Yes, this $375 ‘antifa’ jacket from Barneys is actually real

Welcome to the Revolution. Here's your jacket.

Those who identify with the antifa movement are against fascism and, usually, capitalism. So, naturally, Barneys is selling an ‘anarchy jacket’ for $375. The military-style field jacket is adorned with an anarchist symbol and various on-brand statements. The front says “REVOLUTION” across the chest with a couple of backwards letters to evoke just the right amount of edge, and the back says “Seek Truth” and “The Devil Made Me Do it,” complete with a small illustration of a devil’s tail. The jacket looks like something that teens have been making themselves for years with sharpies and patches.

After photos of the jacket surfaced online, people began ridiculing it on Twitter.

— Turning up the podcast at drive thru window (@viperwave) November 3, 2017

Alpha Industries, the manufacturer of the jacket, started off as a contractor for the U.S. military and has a long history of making field jackets and bomber jackets. Angelyn Fernandez, VP of Product at Alpha Industries, said in an e-mailed statement to the Daily Dot said that the inspiration behind the jacket is “self-expression.”

“We have seen resistance to power and authority become a trend in our current pop culture and society, often expressed through fashion,” she said. “Since 1965 the M65 field jackets have been a favored method to graphically express one’s opinion. We developed the Barneys M65 anarchy jacket to encompass the artistic and graphic expressions of individuality.”

But the internet did not appreciate the manufacturer’s effort to try to sell a political movement on a jacket.

1. Go to the army surplus store
2. Buy a jacket for $17
3. Tell a high school sophomore to write his #edgy thoughts on it
4. Profit

FIGHT THE POWER! ANARCHY! (Only $375 from Barneys department store) https://t.co/vycutNHqAv

they didn't include the saying 'when the people have nothing to eat, they will eat the rich' wonder why https://t.co/DIyWmpaA4j

The revolution will be dry clean only. https://t.co/YcCMwJ2Mst

The jacket is dry clean only.