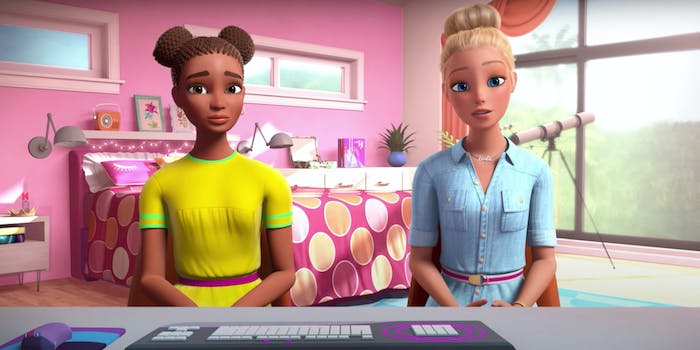 Barbie (yes, Barbie) made a video blog about racism

Barbie and her friend Nikki used their platform to have this discussion.

Elmo and his father Louie tackled racism and the Black Lives Matter protests over the summer on a CNN special town hall, explaining it in such a way that young viewers who watched Sesame Street could comprehend it. Now, Barbie (in animated form) is using her own platform to similarly talk about racism to her viewers.

In the latest video uploaded to Barbie’s YouTube channel (where she has more than 9 million subscribers), she’s joined by her friend Nikki to talk about racism.

For the most part, Barbie listens as Nikki talks about how security kept stopping her when she sold stickers on a beach and a teacher who told her that the reason she got a perfect score on a French honors club entrance exam was that she “got lucky.” But Barbie is also outraged on Nikki’s behalf.

“I don’t want to have to constantly prove and re-prove myself,” Nikki explained when Barbie asked why she didn’t prove that teacher wrong. “He supported you right from the beginning and didn’t support me. Usually, when I talk about these things, people make excuses…But those are just excuses. People did these things to me because I was Black and they made the wrong assumptions about me.”

Nikki’s brushes with racism aren’t unique to her, but they’re clear examples of how pervasive racism can be in a person’s life. The conversation between Barbie and Nikki is geared toward young children (particularly white children) who regularly tune into Barbie’s channel, but it’s also the kind of video that relays how harmful microaggressions can be to adults who might think that racism is done with or only acknowledges it in the broadest of strokes.

Mattel, which has made moves to be more inclusive in recent years with its messaging and products, wanted to make viewers aware of the conversations happening in the world right now.

“The goal of the episode is to help girls to understand that there is a huge movement going on in the fight against racism, why people are marching together and the importance of reading and learning more about Black history,” Mattel said in a statement.