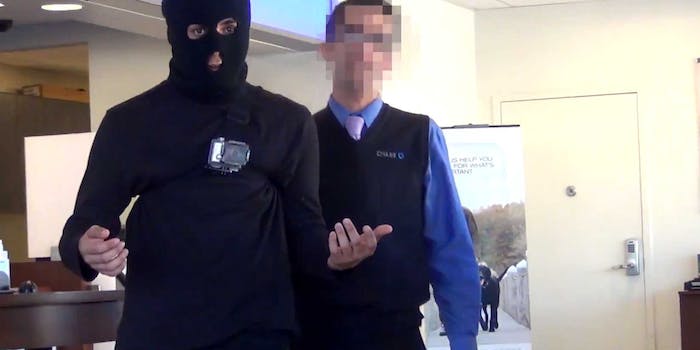 Never would have guessed.

Sometime during YouTube’s ascent as a video platform, the definition of “prank” slid from “practical joke” to “ill-advised and obnoxious public behavior that someone happened to film.” The virality-based channel Whatever typifies this trend, though its latest offering may set a new standard for reckless endangerment. They sent a dude to visit some banks with a ski mask on.

Ostensibly walking into each branch to inquire about opening an account or diversifying his portfolio, the subject is rebuffed by tellers and security guards at every turn. Most are instantly aware that the stunt is meant to be funny. “You don’t want to be joking about that,” he’s warned at least twice. No kidding: at one point a good samaritan puts him in a powerful sleeper hold.

But hey, if that and a police bulletin are the gravest consequences of this little escapade, he’s getting off pretty easy. You never know when some concealed-carrying vigilante might see a chance to play hero. Is there Kevlar under that sweater?