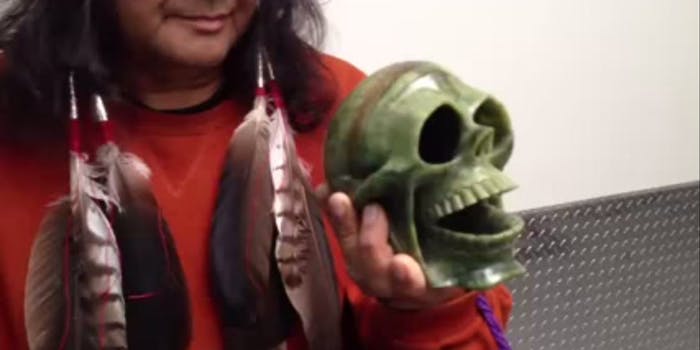 The sound of this Aztec death whistle will leave you horrified

Most appropriately named whistle ever.

It’s been quite a day for terrifying noises. First a Russian sports fan sent us all cowering with her hellbeast-summoning cheer, and now a year-old video of something called a “death whistle” is going viral. We’re never going to sleep again.

The Aztec death whistle, or “silbato de la muerte,” truly lives up to its name. The ancient Aztecs used it as a noisemaker in ceremonies—terrifying ceremonies, we assume. They also used it as a battle cry, which would have guaranteed them victory if their enemies did the smart thing and ran away immediately.

YouTube user thefuzzybrothers uploaded this video in January 2013, where it slumbered peacefully until Reddit’s r/videos awakened it yesterday. There’s no context for the presentation shown on screen, but several redditors quickly pointed out that the video editor’s addition of hoofbeats, meant to represent a thousand advancing Aztecs on war horses, was historically inaccurate—as horses aren’t native to North America and thus the Aztecs would not have been riding them.

If you’d like to see a demonstration of the death whistle with a little less audio editing and a little more explanation, here’s musician Xavier Quijas Yxayotl demonstrating the sound of a death whistle made from a jade skull.