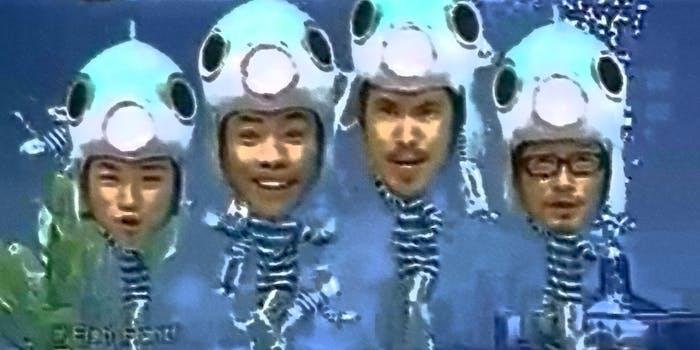 Prepare to lose the rest of your day.

If you thought bands like Devo or Men in Hats conquered the heights of awesomely terrible music videos in the 80s, think again. You obviously haven’t seen “Fish Fight” by Japanese band Yaen.

Yaen’s glorious contribution to the world of WTF is just one choice selection from Awesomely Bad Japanese Music Videos, a popular panel that’s been making the rounds at fan conventions since 2007.

On August 9, the panel brought the best of the worst videos from the other side of the Pacific to Otakon in Baltimore, Maryland.

Prepare yourself for a truly unique—and oddly educational—journey through the music of Japan as we take you on a tour of the group’s most memorable specimens.

If you have ever wondered what an anatomy lesson would be like on acid, this is it. You may never eat steak again.

The lead singer of Daigo Stardust can only be described as a bizarro Japanese Elvis Presley. Donning overly gaudy outfits, he belts his way through Rock the Planet with actual planets acting as backup vocals.

Apparent Disney Dwarfs go on a mining expedition in… well, suffice it to say this video is both WTF and NSFW.

“RATSBANE” features an asteroid strike and its devastating effects, such as 50-foot-high Japanese KISS wannabes.

In this video, Rolly Teranishi displays his eccentricity for appalling fashion while rocking out inside a pack of Fruit Stripe Gum, because where else would you rock out if you were Rolly Teranishi?

Cosplay from the apocalypse.

Enjoy watching this band pound on superimposed MS Paint cupcakes as if they were drums.

This probably sets the world record for man ass in a single video.