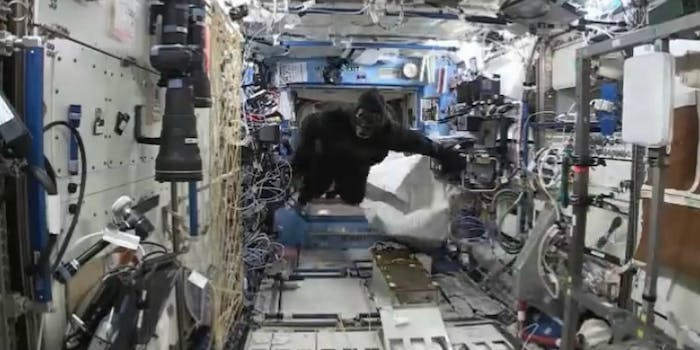 The astronauts on the ISS have a gorilla suit, thank God

It might be time to bring Scott Kelly back home.

With astronaut Scott Kelly’s year-long mission on the International Space Station nearing its end—he’ll return to Earth next Tuesday—life is getting pretty silly 200 miles above the planet. Kelly and his colleagues have already taken to botany in space and have chomped down on space-grown vegetables, presumably while enjoying movie night.

Recently, though, the goofiness quotient was amped up, and somebody on board, presumably Kelly, decided to dress up like a gorilla. With a suit and everything.

It’s amazing what astronauts can teach us. As we all should know if we’re strapping a huge bag containing a live gorilla to the floor, you need to make sure you zip it before you leave. Otherwise, the gorilla can escape as easily as Billy the Kid slipping off a pair of handcuffs. Like the astronauts have taught us, the same principle holds true in zero gravity.

Also, William Shatner was right. As evidenced by the above video and this 1963 Twilight Zone episode, gorillas make excellent flight stowaways.