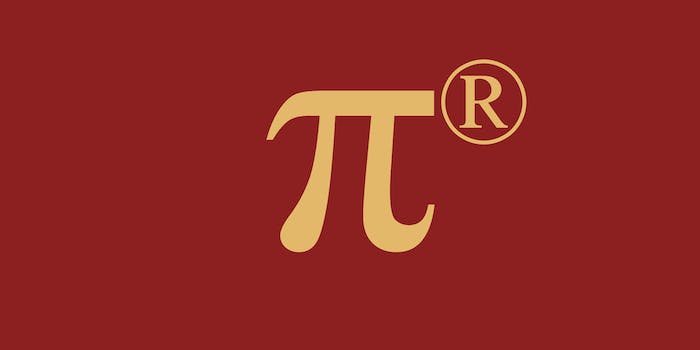 No symbol is safe.

Is it possible to trademark a 3,000-year old mathematical symbol? Under American law, the answer is apparently yes.

Wired reports that multiple sellers on online marketplace Zazzle were shocked to find last week that their designs had been taken down as a result of a cease and desist notice by one Paul Ingrisano, alleging that their work infringed upon his registered trademark.

The trademark violation in question? The symbol for the mathematical constant pi, which has been in constant use for the past three millennia. Ingrisano filed for copyright in 2012.

The trademark registered refers to “the mark consist[ing] of the pi mathematical symbol followed by a period,” but nonetheless, Ingrisano’s lawyer Ronald Millet’s cease and desist letter (embedded below) forced the suspension of sale of all goods on the website containing the mathematical symbol in any form, regardless of the existence of the additional period.

Designer Jez Kemp was emailed by Zazzle to inform him that they “will be removing all products in your store with the mathematical symbol ‘pi’ as it relates to goods related to this trademark.” This is despite the fact—as a quick look at his website shows—his own stylised designs incorporating pi make no use of a period.

Additionally, Kemp points out on his blog that even when one looks past the absurdity of claiming an ancient Greek universal mathematical symbol as your exclusive trademark, this isn’t how trademark law works. Trademarks refer to a specific logo, not any and all usages of a term, symbol or logo. Apple does not own the exclusive rights to the word apple in all contexts, for example.

A look at the details of the trademark application show that while it’s described as “Illustration: Drawing with word(s)/letter(s)/number(s) in Stylized form Typeset,” there is no actual graphical representation of the logo, just “pI” in a serif typeface and the aforementioned description of the “pi mathematical symbol followed by a period.”

This lack of clarity over the nature of the logo trademarked allows for abuses like we have just seen, and goes against the spirit of trademark law; it is, Kemp says, like if “McDonalds [were to claim] the letter M as a trademark. The trademark is the combination of style and symbol, not the symbol itself.”

Wired spoke to Mark Lemley, a law professor at Stanford University, who said: “if you want to sell T-shirts and on the tag your brand name is the symbol pi, I think that’s a reasonable trademark. But if what you want to do is actually prevent people from using the symbol pi on a T-shirt, then I think you’re missing the point of trademark law.”

Kemp is just one of many complainants: Zazzle’s forums have been flooded with angry messages from customers and sellers at what is perceived to be a gross abuse of trademark law.

“I am enraged!” Says one poster; “Here many of us are trying to spread the mathematical truth, and some lunatic thinks he owns part of the Greek language and its usage as part of the language of the universe! Do you think you can even make t-shirts without pi being utilized in the process somehow?!”

So why does Paul Ingrisano own the trademark to Pi? Well, he lists his occupation as working at “Pi Production Corp” on his Facebook page, and as the owner of “Pi apparels” on LinkedIn, which may go some way towards explaining his affinity for the mathematical symbol.

Zazzle has since bowed to pressure and reinstated the products containing the pi symbol. Whether Ingrisano will seek to take this further—and whether he will be laughed straight out of the courtroom—remains to be seen.