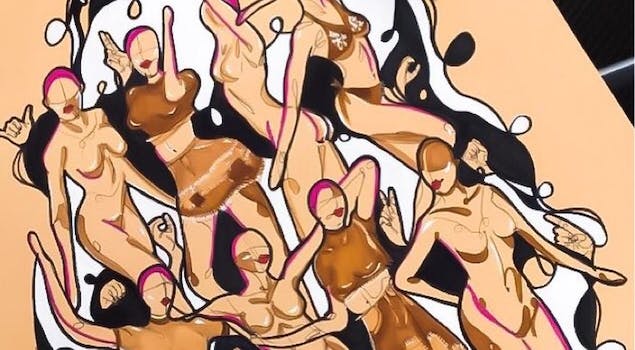 Art student hides secret F U in her final exam

It's all in the hands.

A brilliant design student named Lama Ali was buried in work, thanks to her fashion drawing professor, who hit her with three finals due on the same day. “You got me fucked up,” she thought. So she got back at the professor in the only way available, by hiding a message in her drawing.

When your drawing teacher assigns 3 finals so you secretly write "you got me fucked up" in sign language on your final piece pic.twitter.com/XY40MmuiX5

The message is, of course, “you got me fucked up.” If you happen to know the American Sign Language alphabet, you can find it by following the hands of all her models. Ali’s professor apparently didn’t know ASL, though. She told BuzzFeed that the prof “absolutely loved” the drawing on its merits and didn’t detect the sick burn concealed within.

There was a question about the significance of the hand signs, but Lana managed to wave it off by saying she just wanted more practice drawing hands.

None of her fellow students ratted her out, and “the secret is still safe,” she told BuzzFeed.

Safe for now, anyway. Her tweet of the drawing has been seen hundreds of thousands of times, which means it’s not impossible it’ll get back to the professor. If they’re reasonable, they’ll concede the whole thing is very good and clever. If not, well, we hope those grades are already finalized.