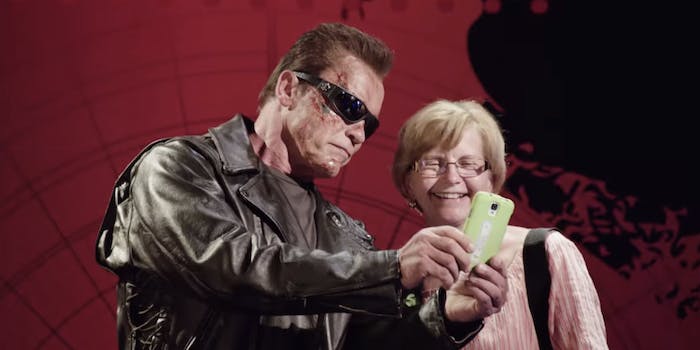 Holding true to his many promises that he will, in fact, be back, former California governor Arnold Schwarzenegger donned his leathers in a promotional stunt for the upcoming Terminator: Genisys, premiering later this summer.

Scraped up and metallic, the former Mr. Universe used his signature stiff acting to scare the crap out of unsuspecting tourists at the Madame Tussauds Wax Attraction in West Hollywood. Patrons of the museum posed for photos with the Terminator, who came to life, resulting in screams and hyperventilation.

Schwarzenegger spent the rest of the afternoon strolling around West Hollywood reciting the famous robot’s lines and confronting a not-so-lifelike Arnold impersonator.

The stunt promoted a contest to attend the Terminator: Genisys with Schwarzenegger to benefit After-School All-Stars, a nonprofit committed to providing after school programs to children across the country.

It’s comforting to know that, while Arnold spent a solid afternoon making half of West Hollywood lose their collective shit, it was all for the good of the children.