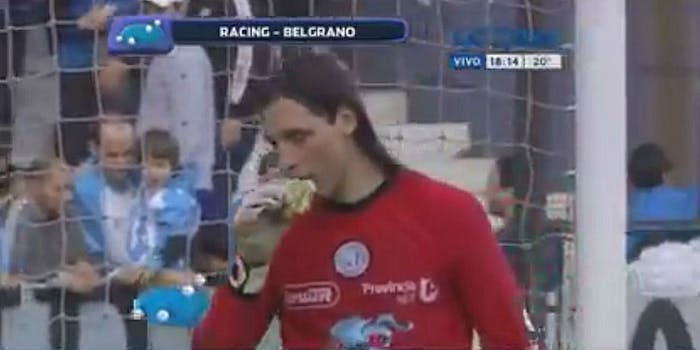 You've got to ingest your daily serving of protein whenever you can.

Internationally elite soccer players are used to fans throwing objects at them while they’re on the field. Sometimes, it’s bottles. Other times it’s bags of urine. On occasion it’s pepper spray.

But only rarely does a rival fan gift a player with something that player actually can enjoy. Like a hamburger. See how goalie Juan Olave of Belgrano in the Argentina Primera Division reacts when a rival fan threw a grilled meat patty of deliciousness at him.

He calmly picks up the burger and chows down.

Smart move by Olave. You can’t play keeper at an international level on an empty stomach, and though it’s nothing like Babe Ruth supposedly eating a dozen hot dogs and eight bottles of sodas in between doubleheader games for the Yankees in the 1920s, give points to Olave for not being afraid to chew a burger that had once resided in and out of at least one fan’s hands.

It’s not as good as my favorite clip of a player eating a fan’s food, as seen below, but Olave’s decision still was mighty impressive.