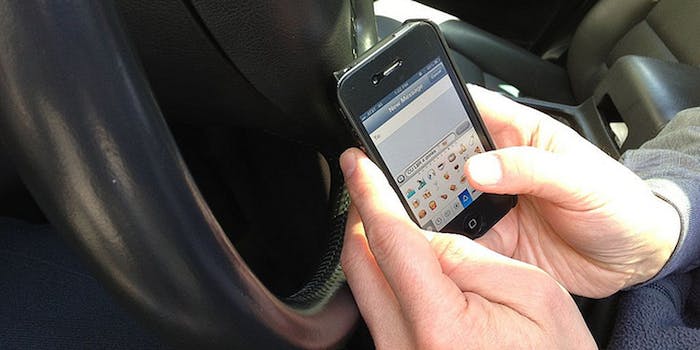 Laws against texting while driving are keeping teens alive

Distracted driver is saving lives, but most of them skew younger.

While car wrecks happen every day, they’re happening at significantly lower frequencies than in year’s past.

Laws against texting while driving, for instance, have taken hold in 44 states, as well as Washington, D.C. But a study published in the Journal of American Health shows that those laws might not have the same effect on every driver on the road.

States with anti-texting laws only affected drivers 21-years-old and younger, according to “The Impact of Texting Laws on Motor Vehicular Fatalities in the United States.” The study, published by a group of researchers from the University of Alabama and Samford University concluded that no anti-texting laws reduced the fatalities of people above age 21.

More specifically, the study found that laws allowing officers to pull over all drivers caught texting resulted in a five percent decrease in fatal accidents among drivers 15-21. States allowing officer to pull over only young drivers caught texting resulted in a 11 percent decrease in fatal accidents for the same age group. However, in states where officers are only allowed to issue citations for texting while driving after pulling someone over for an unrelated offense, otherwise known as a “secondary texting ban,” the fatality rate did not change.

“Our analyses indicate that primarily enforced texting laws are associated with fatality reductions among younger individuals, both drivers and nondrivers,” the authors wrote.

Researchers analyzed data from 48 states (which didn’t include Alaska, Hawaii, or Washington D.C.) from 2000-2011. They compared the motor-vehicle fatality rates between states with texting bans and states without bans. They also took into account the fatality rate changes before and after the lawmakers implemented the new rules. The researchers also took into account other causes of fatal crashes, such as speed limits, drivers license revocation laws, gas prices, and unemployment rates.

Texting laws had only been passed in 31 of the contiguous United States for the time period that data was collected.

Accidents that happen as a result of texting is something that’s not limited to driving, though. A study published earlier this year revealed that we’re really bad at walking and texting at the same time, which leads to bumping into people or accidentally stepping onto the road and into oncoming traffic. Apple went so far as to file a patent that would help iPhone users see what’s in front of them while texting.