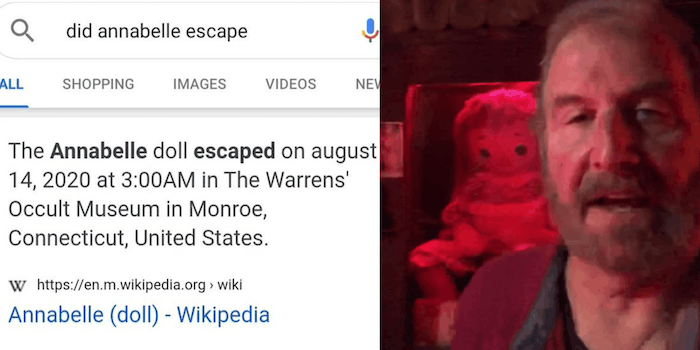 A viral rumor was started claiming that the doll the movie Annabelle was based on “escaped” from a museum where she is displayed, and, because it’s 2020, the year in which anything seems possible, people totally ate it up.

There are conflicting reports of the rumor’s origins. Snopes reports the rumor started after Annabelle Wallis gave an interview with the Hollywood Reporter to promote her upcoming film, The Silencing. Wallis played Mia Form in Annabelle, and she spoke with the Hollywood Reporter about working with Tom Cruise in The Mummy. The magazine included “escape” scenes from the latter, and Wallis spoke about “running” in the interview, seemingly prompting Chinese-language sites that shared the Friday report to be mistranslated. On the flip side, People reports the rumor was started after the Annabelle doll’s Wikipedia page was changed to say she “escaped” from the Warren’s Occult Museum in Connecticut at 3am on Friday. It’s likely that Wallis’ interview happened first, and then the doll’s Wikipedia page was changed to couple the mistranslated reports.

The doll isn’t even at the Warren museum, which was opened by the late, legendary paranormal investigators Ed and Lorraine Warren. The museum has been closed for years, and its artifacts—including the infamous doll—remain in the safekeeping of the Warrens’ son-in-law Tony Spera. In fact, Spera debunked the rumor on the family’s YouTube channel.

“Annabelle did not escape. Annabelle’s alive—well, I shouldn’t say alive. Annabelle’s here, in all her infamous glory,” Spera says, panning the camera over to show Annabelle.

But because, in perhaps what is the most chaotic year imaginable—in which there have been reports of a possible World War III, the release of UFO videos, and murder hornets—a demonic doll on the loose really didn’t seem that far-fetched. Just like with its predecessors, people created memes to get through the stressful times.

The doll that was once displayed at the Warren museum comes from one of the Warrens’ investigations and serves as inspiration for many horror films, not just the Annabelle franchise. According to Latestly, A little girl named Donna had a Raggedy Ann Doll in the ’70s, and Donna would complain that the doll was moving around, appearing in different places. When a medium told the family that the doll was “possessed” by Annabelle Higgins, a 7-year-old who had died in the house, the family called the Warrens to perform an exorcism and take the doll away.