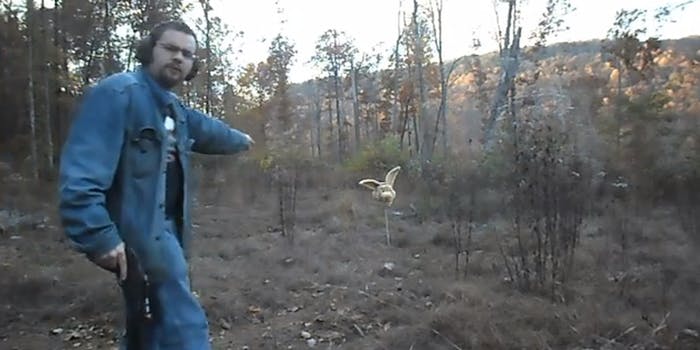 What happens when a furry doesn’t pay the rent

Take one angry man in a Canadian tuxedo, add one shotgun and a wascally woommate, and you get this.

That’s one way to settle a roommate dispute.

When an angry YouTube user’s roommate, a furry, went out and bought a new fursuit instead of paying his share of the rent, the wronged party decided to take the suit out to the woods and put it down.

Or so claims the user, gammagray777, who joined YouTube in 2011 but has so far only posted this video.

The video, called “what happens when a furry don’t pay the rent” shows a guy in a Canadian tuxedo using a shotgun to shoot a fur rabbit head on a stake. In the description, he wrote, “I’m just one pissed off bobcat. Roommate goes out and buys a fursuit rather than pay their part of the rent.”

In the beginning of the video, he yells, “This is what happens when you don’t pay the rent!” and fires at the head. It falls from the stake, and he reloads and shoots it again.

At the end of the 45-second clip, he again shouts, “Pay the rent!” and storms off screen.

In the comments section, furries are outraged that a fellow furry’s roommate would destroy their precious property. Other people defend the shooter, saying the roommate shouldn’t prioritize a hobby over a contract he made to share a living space with someone else.

Either way, that is one dead rabbit, and one terrible roommate situation. Should’ve taken that left turn at Albuquerque.