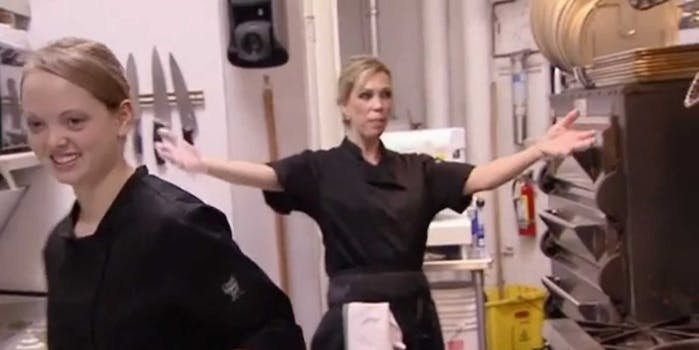 Owners Amy and Samy Bouzaglo hired (and then broke up with) a PR firm in an attempt to rehabilitate their image.

Will undercooked pizza and screaming restaurant owners once again be on the menu in Scottsdale, Ariz.?

Amy’s Baking Company is officially back in business.

The Scottsdale restaurant suffered a storm of negative publicity after an episode of Kitchen Nightmares exposed it as a restaurant whose owners pocketed tips instead of giving them to staff and have fired over 100 employees. Things grew worse when owners Amy and Samy Bouzaglo fired back at television viewers who left negative sentiments on its Facebook wall. Amy’s Baking Company has since blamed hackers for the Facebook fiasco.

As if that wasn’t enough, the company’s overworked PR firm—hired after the Facebook tirade went viral—decided to call it quits, according to the Phoenix Business Journal.

But Amy and Samy haven’t given up. On May 19,  Amy’s took its first steps toward a return to normalcy. According to the Huffington Post, the restaurant hosted a job fair, seeking to hire 30 new employees to act as waitstaff, dishwashers, and cooks.

In the late afternoon hours of May 21, the doors of Amy’s Baking Company opened once again.

Reservation holders for the grand re-opening took to Twitter to report on the next chapter in the company’s history. So far, things have been relatively quiet.

A line of folks to get in and the security guards seem to be multiplying #dontfeedtemaftermidnight twitter.com/ramzbergeron/s…

Pizza is cooked perfectly. A bit greasy, but most pizza is. The fig and prosciutto pizza has a sweet taste to it. It’s good! #AmysBakingCo

Although the event went off with little drama, the restaurant’s owner, Samy Bouzaglo, may have bigger problems. Bouzaglo, an Israeli citizen, is reportedly facing deportation from the U.S.