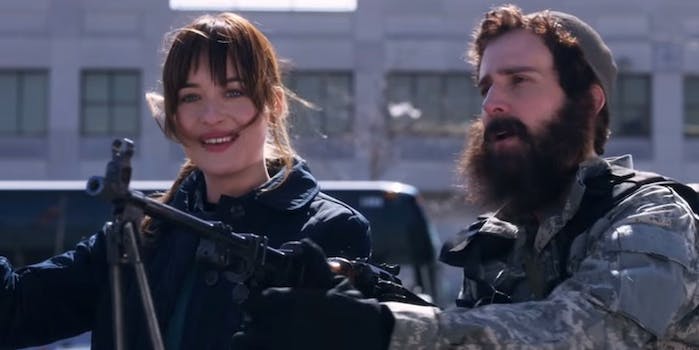 Why teens are joining ISIS

A New York Times article published last week drew attention to the growing trend among affluent, intelligent, and socially well-adjusted young women joining ISIS or other Islamic terrorist organizations. This phenomenon struck the Grey Lady as particularly curious because, as a lawyer for the families of one of the girls put it: “It is those young people who are liked, who are smart, who think, who are caring, who are ripe for radicalization” instead of the outcasts. In a Saturday Night Live skit that aired over the weekend, one of those girls was played by Fifty Shades of Grey‘s Dakota Johnson, underscoring the seeming absurdity of the act.

“We tend to think they are crazy,” explained John Horgan, a psychologist and professor at the University of Massachusetts and one of the few American psychologists who specializes in terrorists. “Because of what terrorists do, we assume that can be explained via the pathology of those people, but trying to explain terrorism as mental illness is misleading.”

If we want to stop our youth from gravitating toward political extremism, we need to stop being surprised when we discover that people attracted to dangerous ideologies aren’t crazy misfits. Instead, we need to recognize that political extremists, including but not limited to the Westerners who join terrorist groups like ISIS, are motivated by a deeply rooted element of human nature—that is, the need to feel important and find one’s place in, and understanding of, the larger world.

“From a psychological perspective, the appeal of violent extremism derives from a clever exploitation of two basic human needs: the need for cognitive closure and the need for personal significance,” writes Arie W. Kruglanski at E-International Relations. “The need for closure amounts to the quest for certainty, and the eschewal of ambiguity; it is the desire to feel assured about the future, to know what to do and where to go. It is the quest for structure and coherence in one’s outlook and beliefs.”

Association for Psychological Science fellow Michael A. Hogg echoed this point in a recent article for Current Directions in Psychological Science, arguing that “‘uncertainty-identity theory’—the role uncertainty plays in motivating people to join a social group to feel accepted—could be a contributing factor pushing people toward fringe groups—whether ideological, religious, or political.”

Kruglanski’s and Hogg’s observations may seem novel, but they have actually been around for quite some time. The gist of the idea was best summed up by President Dwight Eisenhower in a 1959 letter he wrote to a World War II veteran named Robert Biggs endorsing one of his favorite philosophical books, Eric Hoffer’s The True Believer. “Dictatorial systems make one contribution to their people which leads them to tend to support such systems,” the president explained, “freedom from the necessity of informing themselves and making up their own minds concerning these tremendous complex and difficult questions.”

In other words, the people most likely to be attracted to ISIS are the same people who would have been drawn to the extremist ideologies of Eisenhower’s time (e.g., Nazism and Communism). They are men and women who are well-informed about the world around them and want to find a place for themselves within it, to identify with a greater cause and quiet the existential restlessness that churns inside them. While those traits don’t exclusively apply to the young and educated, it’s hard to deny that they’re more likely to fit the bill.

This is important to note because it transforms the prospect of ISIS recruiting Westerners from an incomprehensible menace to something far more relatable. It’s the same reason that might prompt people to join a cult or participate in far rightist or far leftist revolutionary movements: Those movements quell any uncertainty they might have about themselves and their environment. Recognizing this is not the same as condoning it; terrorist violence is wrong regardless of the cluster of reasons behind the motives of its perpetrators.

That said, being inclined toward an extremist mentality doesn’t always mean that someone is inherent malevolent or even stupid. When psychological experts from the United States and the Netherlands collaborated on a study to determine how political extremists differed from political moderates, they found that one common trait was the former’s unwillingness to reflexively agree with what others told them were socially acceptable ways of thinking.

That said, even the tendency to refuse to take other people’s assumptions for granted came with a significant downside. “People with extreme ideology and more extreme attitudes diverged significantly from prescribed anchors, but not self-generated anchors,” the study also discovered. “So it appears that extremists are deliberate and thoughtful in their judgments, but swayed by a belief in their intellectual superiority.”

When it comes to stopping young people from being attracted to political extremism, therefore, the first step lies in encouraging young people to draw their ideological conclusions about what they experience in their own lives and see in the news. Because this need for independent thinking and intellectual self-respect drives extremism in the first place, attempts to steer people away from extremist beliefs or outright prohibit them might only make them more seductive. Instead of bombarding our youth with negative messages about organizations we don’t want them to join, it might be beneficial to allow them to search for knowledge themselves, confident that their own good intentions will allow them to avoid being seduced by unsavory organizations that pervert the truth.

We need to spread information about why extremism can appeal to people so that those who might otherwise be lured in by it can have the knowledge to stay away. None of the observations in this article should be limited to politically or socially conscious websites. No one should grow up without knowing the threat of extremism or the psychological factors that might cause one to be attracted to it, any more than we allow youth to grow up without a similar understanding of what might draw them to illegal drugs. While this wouldn’t eliminate the problem of extremism entirely, it would almost certainly save some lives that might have otherwise made poor choices.

Of course, the most important way we can stem the tide of extremism is to remind those who may be susceptible to it of the ones they hurt when they succumb to the allure of terror. Near the end of The New York Times’ article, it quoted the family of a British Muslim teenager who joined ISIS as telling her: “Your actions are a perverted and evil distortion of Islam. You are killing your family every day with your actions. They are begging you to stop if you ever loved them.”

No amount of psychological and sociological analysis can ever be as powerful as statements such as that one.