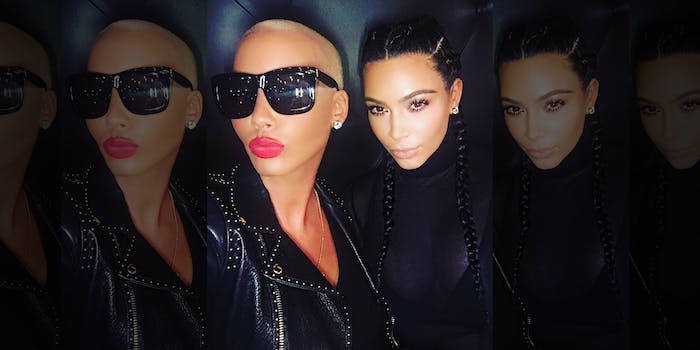 Does this Amber Rose–Kim Kardashian selfie mean the Kanye West fight is over?

Throughout history, treaties have helped ensure peace between rival nations. The Treaty of Paris ended the French and Indian War. The Treaty of Versailles ended World War I. But now it appears that the feud between warring powers Kanye West and Amber Rose might have been resolved not through a treaty, but instead, through a selfie.

Late Monday night, the story got even more interesting, as with Rose and Kim K posting a selfie together.

Why yes Kim, we would like some of that tea. TELL US WHAT IS GOING ON.

Did the two ladies run into each other while out and say, “You know what would shake things up again? If we posted for a selfie together.” Or was this a photo from the peace talks, where the duo called West a shithead over $200,000 Armand de Brignac champagne, with Kardashian fully backing Rose up on her suggestion that Kanye enjoyed a finger or two up in his booty?

Honestly, we may never know. This selfie situation could join entertainment’s biggest mysteries, like “Who killed Tupac?” and “What really went down in that elevator between Solange and Jay-Z?”

All jokes aside, it would be pretty damn cool if Kim K supported Rose in this situation, because Kanye has been a total jerk to Rose in the past. And while we’re all trying to figure out how exactly this selfie came to pass, the two women are probably cackling with glee at all the Twitter likes and retweets it’s earning them.