Thanks to Amazon’s need to take control of every aspect of our consumerist lives, we’ll never have to worry about running out of munchies again: Junk food will be a mere button-tap away.

Amazon last year unveiled Dash Buttons, small gadgets available to Prime customers that let them reorder common household items with the quite literal press of a button. The Wi-Fi-enabled devices are meant to streamline the process of restocking things like detergent and toilet paper.

On Thursday, Amazon announced a slew of new buttons. There are now more than 100 of them to help you indulge your lazy tendencies. This brings us to the real power of these gizmos: replenishing your much-needed drunchies and munchies when provisions run low. 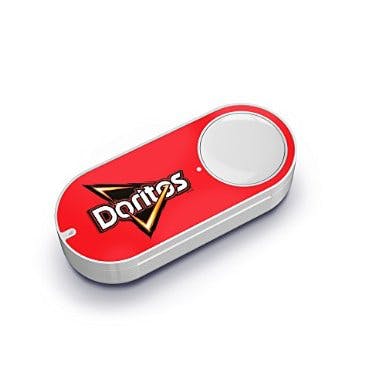 The Kraft Macaroni and Cheese Dash Button has been available from the beginning, but the new buttons include Doritos and Orville Redenbacher’s Gourmet Popping Corn. After returning home from your debaucherous activities and working your way through the pantry full of snacks, make sure to tap that mac-and-cheese button before you pass out.

The buttons might not be a quick fix for your immediate hungry-and-intoxicated-needs, but think of them as preventive care—because when the goods get delivered, you’ll be ready for your next night out.

Plenty of other new Dash Buttons will also help out with your hangover. Pop open some O.N.E. Coconut Water, for example, or some Illy Bottled Coffee.

Amazon lists all the Dash Button products here. If you forgot to restock your cheesy goodies the last time you went shopping, at least there’s always late-night pizza.