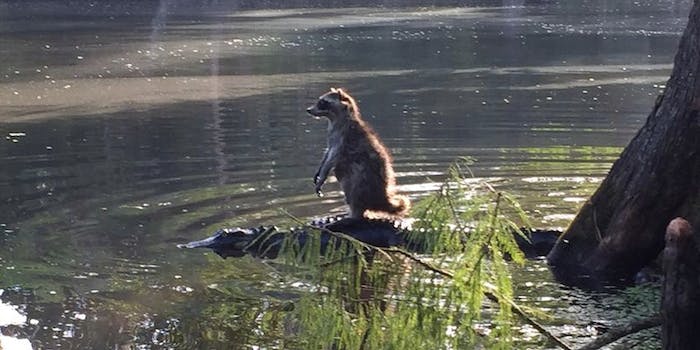 An exclusive interview with the raccoon and the alligator

The new identities of the escaped convicts, revealed.

“We can’t run forever,” David said as he tore a chunk of cheese off a discarded pizza box and crammed it down his throat. “We knew they’d be looking for us if we went north, so we hit the water and floated down.”

David and Richard had escaped from the Clinton Correctional Facility, just outside the Canadian border, on June 6, using tools they allegedly received from a prison guard. In the days since, authorities have combed the woods of upstate New York, but have yet to find any clues to the whereabouts of the two convicted murderers.

“They’re not going to find us,” Richard told me just before he dipped his nose below the river blowing bubbles in the water. “They aren’t going to find us because we ain’t what they’re looking for.”

Under normal circumstances, any journalist would have asked Richard to clarify what he meant. But in this case, it was clear: Richard had become an alligator, while David, his partner in crime, was now a raccoon.

The pair was spotted in the Oaklawaha River in Ocala, Florida, on Sunday, when a man and his son were out on a hike looking at the wildlife.

“Definitely the photo of a lifetime,” Robert Jones, the photographer, told WFTV news after the story broke. Little did he know his photo could be the break in the case New York authorities need to catch David and Richard.

As we walked along the river, the two fugitives strode with confidence. “Yeah, we heard about that picture this morning, but I ain’t about to start sweating. In fact, now that I’m an alligator, I can’t sweat. So I mean that quite literally as well as in the figurative sense,” Richard said.

David added, “You know how many raccoons are out in the woods? Hundreds of thousands, probably. And good luck walking up to a gator and asking him where he’s been in the last week. You’ll get chomped!”

We didn’t talk much longer, as David and Richard had to rush off. They were headed to the Everglades to further obscure their whereabouts and identities until the dust settles. “We don’t really know what we’re going to do after this, no plans really,” Richard said. “I just know that I can’t go back to the joint. I belong out here with all the other wild animals.”

When I asked how they managed to transform, they answered simply: