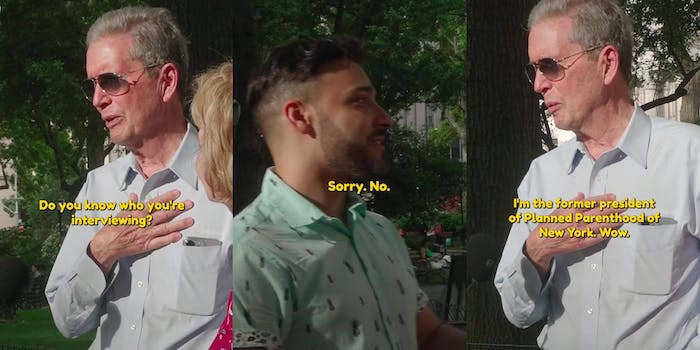 ‘LEGEND’: TikToker happens upon grandson of Margaret Sanger—and asks him about abortion

'You cannot make abortion go away by criminalizing it.'

TikToker and YouTuber Karim Jovian typically does man-on-the-street interviews about a variety of open-ended topics as well as pranks and “social experiments.” In one recent TikTok, which now has more than 11 million views, he asks New Yorkers their “thoughts on abortion.”

@karimjovian Was doing an Abortion interview and ran into the founder of Planned Parenthood by chance! Where do you stand on abortion? #plannedparenthood #abortion #abortionrights #abortionban ♬ original sound – Karim Jovian

“You cannot make abortion go away by criminalizing it,” Sanger tells Jovian, who has a little over 54,000 followers. “All you do is you make it unsafe. You put women at risk.”

This interview took place before the Supreme Court voted 6-3 to overturn Roe v. Wade on Friday, ending nearly 50 years of legalized abortion. The thousands of comments are typical of TikTok (“KING,” “A LEGEND”). A more recent comment is a better barometer: “Feeling so devastated today.”

On Twitter, where the TikTok was posted with the caption “this is honestly the best ‘do you know who I am'” and got more than 1 million views, Sanger’s views on race and eugenics were brought up. In 2021, Planned Parenthood officially denounced Sanger regarding her views, and in 2020 a clinic in Manhattan removed her name.

Jovian tells the Daily Dot via email that the Sanger interview was “very important” because his own mother had to have a life-saving abortion, and he “grew to learn how important abortion rights are.”

He says the interview was random—he was about to wrap but saw a “cute old couple” and went up to them. Jovian hopes it starts more “dialogue” about abortion, in the wake of Roe v. Wade being overturned: “I think we shouldn’t stop fighting for women’s rights, because if it’s this, then what’s next??”