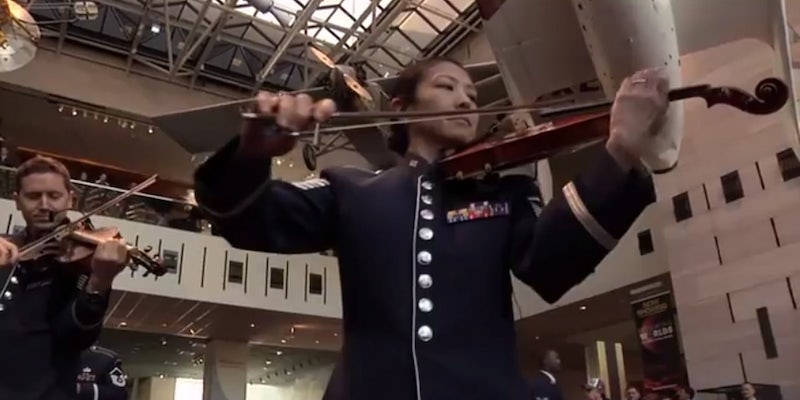 A lone cellist started to play in the National Air and Space Museum, and then magic happened.

Visitors to the National Air and Space Museum in Washington, D.C. were given a treat last week when they came for the sights but got a free performance instead.

The U.S. Air Force Band held its first-ever flash mob on Dec. 3. It started with a single cellist wearing a civilian coat, who set up his chair without notice from the crowd. Taking off his coat to reveal his ceremonial uniform, he started to play.

Soon he was joined by the rest of the Band, conductor Col. Larry H. Lang, and numerous singers standing on the balcony railing where they performed “Jesu, Joy of Man’s Desiring” and “Joy to the World.” Like the cellist, they all started out wearing civilian clothing before they took off their coats to show their uniforms and instruments.

The flash mob, meant to promote their upcoming holiday concerts, was a performance about a week in the making, according to the U.S. Air Force Band’s blog.

“Some musicians are excited, some are leery—everyone wonders if the Band can pull this off,” Technical Sgt. Kristin Bowers wrote.

As the crowd of unsuspecting tourists look on, it’s apparent that they have.

Photo via Department of Defense/YouTube