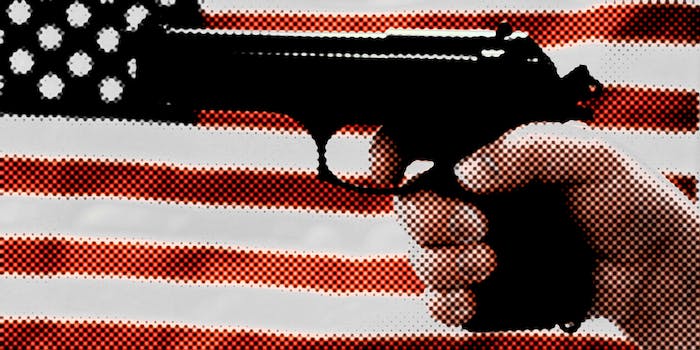 Why are almost all active shooters men?

And why is no one talking about it?

Active shootings are now simply a part of our lives.

In the U.S., there have been more than 150 shootings in 10 years. And in the last month, there have been at least two, including the Marysville, Wash., school shooting on Oct. 24 and, on Wednesday, a shooting at Florida State University that saw three injured and the gunman killed.

These violent crimes are happening all over the country, in states where guns are easily accessible and others where they’re not. They’ve happened in businesses, schools, homes and churches. The shooters are different ages, with racial demographics leaning toward white, but not entirely. For all intents and purposes, the shootings don’t have that much in common—except one thing.

Almost every shooter has been a man.

Federal Bureau of Investigation (FBI) data shows that between 2003 and 2013, only six of the 160 active shooters were women—less than 4 percent.

Despite the overwhelming gender imbalance, we’ve only recently started talking about it, and it remains a backburner topic. Traditionally, media coverage of active shootings has turned to mental health and gun control, and attempts to bring up masculinity have been criticized for being misandrist, or anti-men.

In recent cases, the conversation has even turned violent. When media critic Anita Sarkeesian brought up the concept of “toxic masculinity” in relation to the Marysville school shooting, she was bombarded with rape and death threats.

Not a coincidence it’s always men and boys committing mass shootings. The pattern is connected to ideas of toxic masculinity in our culture.

“In terms of gender, I think people might be looking for a shortcut that wouldn’t be blaming half the population for being violent,” Michael Rocque, assistant professor of sociology at Bates College, tells the Daily Dot. “If we’re saying there’s something wrong with men, there’s a tendency to be defensive about that.”

But there’s no way to deny that almost all active shooters of the past decade have been men. Even Paul Elam, founder of men’s-rights site A Voice For Men, called the FBI’s statistics “reasonable” in an interview with the Daily Dot. But does that mean masculinity is, or should be, part of the conversation?

According to researchers, the answer is yes. An increasing number of sociologists, including Rocque, who authored a study on school shootings in 2011, say gender should be treated as a key component in how we address active shootings and other violent acts. And we’re not just talking about mass shootings; FBI statistics show that in 2012, more than 80 percent of arrests for violent crimes were men.

“When opinion leaders start talking about the men who commit these rampages, and ask questions like, ‘Why is it almost always men who do these horrible things?’ and then follow that up, we will have a much better chance of finding workable solutions to the outrageous level of violence in our society,” cultural theorist Jackson Katz wrote in Huffington Post.

“If we’re saying there’s something wrong with men, there’s a tendency to be defensive about that.”

Sociology has been studying the issue of gender for more than 60 years, looking at genetics, environment, and especially the media, in connection to how we raise boys and girls. When it comes to men and violent behavior like active shootings, Rocque says it’s more a social problem than an issue of genetics.

“I’m not discounting the effects of biology, but in large part, the differences we see between men and women are a result of culturalization and socialization,” Rocque says. “I think that there is a fundamental misconception that gender and sex are basically the same thing.”

Rocque said American society has evolved so boys are encouraged to show aggression, compete and sexualize women. It’s stark when compared to other countries like Iceland, which has the smallest gender gap in the world and extremely low violent crime rates. Iceland has some of the most progressive laws for gender equality and representation. It’s banned strip clubs and prostitution, as well as introduced a men-only U.N. conference on gender equality, which will now include women.

Rocque adds that, for boys, showing emotion is viewed as a sign of weakness, so they don’t know how to process complex feelings like depression, anxiety or loneliness. Sociology professor andAngry White Men author Michael Krumm wrote for CNN that this leads some emotionally troubled men to “prescribe violence as the solution,” since they don’t know how else to express themselves.

“[We’re] teaching boys that it’s not okay to show their feelings. If a boy is upset or crying, we tend to have a different reaction to that than if a girl is upset or crying,” Rocque says. “The only emotion that’s socially acceptable for boys to show is anger.”

The disconnect between males and emotional intelligence is the subject of The Representation Project’s latest documentary coming out next year, called “The Mask You Live In,” which questions whether we’re failing boys by encouraging aggression over empathy and emotional expression.

Men’s rights activists have largely rejected this theory, calling it an attempt to feminize men. A Voice for Men’s Elam argues that the male capacity toward violence has been a “successful feature in this species’ reproduction,” in part because women have been drawn to larger, more aggressive men. Writing for Fox News, Suzanne Venker, founder of the website Women for Men, says that when women don’t let men be men, they become aggressive or lethargic and everyone loses.

“It is precisely this dynamic – women good/men bad – that has destroyed the relationship between the sexes,” writes Venker. “Yet somehow, men are still to blame when love goes awry. Heck, men have been to blame since feminists first took to the streets in the 1970s.”

“What we need is people who don’t have skin in the gender politics game.”

Men’s rights groups also largely reject studies regarding men and violence. They say the statistics fail to include female-on-male violence, as well as their assertion that women are more violent than men. While Elam agreed that more research needs to be done about the link between men and active shootings, he followed by saying that most of the research that has been done, and likely will be done, on gender is pro-feminist and, therefore, inherently biased against men.

Rocque dismissed the notion that science is pro-feminist, mostly because he said the word “feminism” has been misconstrued to be about women wanting to dominate men, instead of being about male and female equality. In addition, he and other researchers have rejected the concept of male aggression as just being part of their biology, sometimes known as the “boys will be boys” argument.

There are other factors to consider when it comes to active shooters, including ethnicity, economic background and mental health. After all, about one in 10 active shootings from the past decade have ended in suicide. But none of those factors come close to the most common thread of all: that they’re almost all men.

Photo via Emily Stanchfield/Flickr (CC BY 2.0) | Remix by Jason Reed