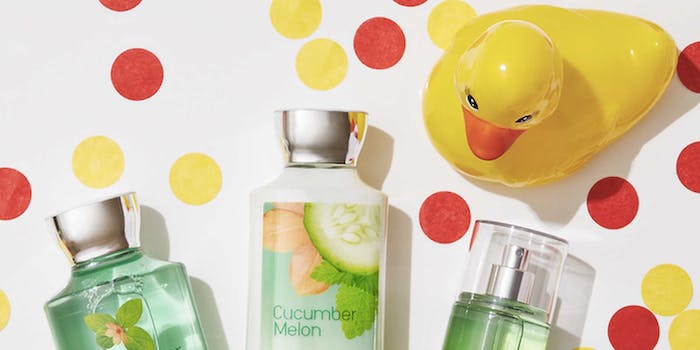 BuzzFeed is the biggest flag that nostalgia and relics from the ’90s are all the rage. Returning classics from the decade such as X-Files and Full House further confirm that the age of “…Baby One More Time” Britney Spears reigns supreme. And now this Bath & Beyond announcement.

But beyond Juniper Breeze and Country Apple, what are the scents from the’90s that we need packaged in little cutesy bottles? Read on:

That neon green is the color of the decade. Every ’90s kid hoped to be slimed, and those lucky enough to get to Nickelodeon Studios may well have gotten splattered with the ooze. Unfortunately, I was not one those kids, so I can only guess that the slime smells something like old glue stocked at elementary schools. So glamorous.

The ’90s were Queen Celine Dion’s heyday. What does “My Heart Will Go On” smell like? Well, probably her tears. So most likely, maple syrup with a hint of cinnamon. Schmaltz never smelled so good.

It seemed like once scientists realized they could make bubblegum-flavored things, the world was plagued by abominations. Bubblegum ice cream. Bubblegum lip gloss. Bubblegum perfume. Bubblegum mouthwash. Bath & Body Works, please bring back the bubblegum beast for us masochists.

VHS tapes would get nice and toasty inside those archaic VCRs, especially if you were a kid who liked rewinding the scenes over and over to rewatch. And, be honest, you definitely loved to huff that hot, melty, plastic aroma.

The otherworldly odor of a sentinel that watched your every move and freaked you the fuck out when you were lying awake in your pitch-black bedroom and it said “Me very hungry” in a gibberish robot language, resulting in bedsheets soaked with piss and a stream of terrified cursing.

So are you ready? Did you eat? Do you have the energy? OK, Vanessa Ann Hudgens’s “Sneakernight” might not have come out until after the ’90s, but she pretty much nails the sentiment of incandescent sneakers like L.A. Lights. They smelled like fake leather and sweat when you broke them out of the box—also known as the smell of tween pride.

Were you a Gushers kid or a Fruit Roll-Up kid? Well, doesn’t matter: We’ve got both encapsulated in this scent that’s sugary enough to send a 8-year-old on a several-hour high, bouncing from wall to wall. Imagine the delightful smell of fructose and falsified fruit all captured within a bottle.