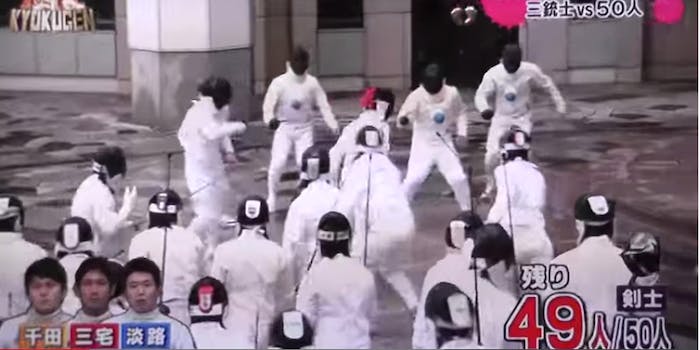 The odds are certainly against them.

It looks like a scene out of an action movie: a horde of masked fighters closes in on a intrepid trio of heroes. But this isn’t an outtake from Kill Bill or a dystopian reimagining of the Three Musketeers. It’s a scene from a particularly elaborate segment of a Japanese game show in 2012.

The show asked three Japanese Olympic fencers—Kenta Chida, Ryu Miyake, and Suguru Awaji—to ward off 50 amateur opponents. To eliminate someone from the competition, the fencers had to pop a balloon in the middle of their opponent’s chest. For a while, it seems as though the expert fencers will emerge triumphant, but you’ll have to see for yourself if they can pull it off.