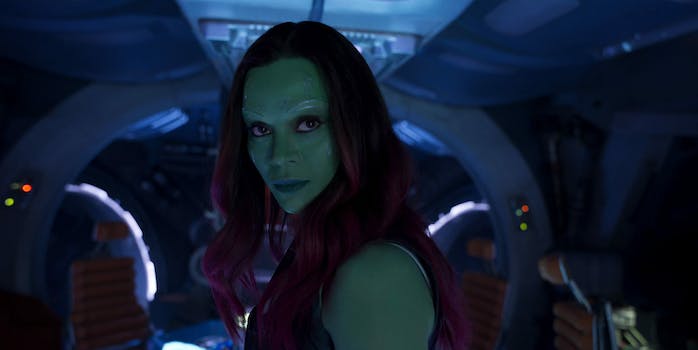 Did Zoe Saldana leak a spoiler for ‘Avengers 4’?

According to Marvel, the title for Avengers 4 is a huge spoiler for 'Avengers: Infinity War.'

According to Marvel Studios producer Kevin Feige, the title for Avengers 4 is a spoiler for Avengers: Infinity War. Hence why it’s still being referred to as ‘Avengers 4.’ But did Zoe Saldana just leak the real title in a promotional interview for Guardians of the Galaxy Vol. 2?

Speaking to the BBC, Saldana talked about filming Infinity War with the other Guardians actors, and then said they were returning for “Gauntlet” later this year. This led some fans to suggest she accidentally leaked the title for Avengers 4, a reference to the Infinity Gauntlet belonging to the supervillain Thanos.

If Kevin Feige was telling the truth about Avengers 4 having a spoilery title, then he can’t have been talking about “Gauntlet.” We already know the Infinity Gauntlet will play a major role in Infinity War, because Marvel namedropped the Infinity Gems in basically every movie to date. The entire franchise is one big teaser for Thanos picking up the Infinity Gauntlet and bedazzling it with all his stolen gems.

So, Gauntlet is probably a working title, selected to avoid actors accidentally leaking the real one. Since Gamora is just a supporting character in Avengers 4, there’s a chance that Saldana doesn’t even know the real title herself.