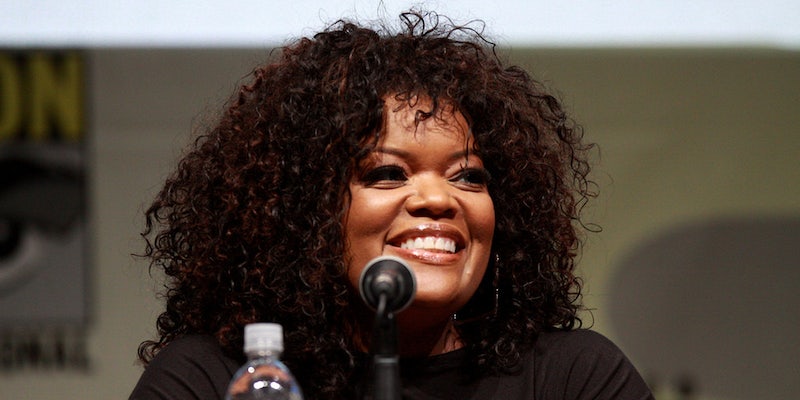 She asked to be released from her contract early to care for her ailing father.

Another member of the Community cast is leaving the show.

Yvette Nicole Brown, who’s played Shirley Bennett since the very beginning of the show, has been released from her contract prior to the start of season 6 filming to take care of her ailing father, TV Guide reported.

While Brown was originally supposed to be part of the show’s sixth season after Yahoo Screen saved it from cancellation, she asked Sony Pictures TV and executive producers Dan Harmon and Chris McKenna to be released from her contract early, which they allowed.

It wasn’t an easy decision for Brown.

“My dad needs daily care and he needs me,” she told TV Guide. “The idea of being away 16 hours a day for five months, I couldn’t do it. It was a difficult decision for me to make, but I had to choose my dad.”

She thanked Sony and Harmon in particular for how they’ve handled the situation.

“Yvette was an integral part of Community and is irreplaceable. We are sad to see her go and wish her the very best,” Harmon and McKenna said in a joint statement.

She’ll still appear in the CBS’s The Odd Couple in a recurring role and called the multi-camera sitcom’s flexible schedule “a better fit for the life I have now,” although she didn’t rule out the possibility of returning to Community in a guest appearance.

It’s unclear how Shirley’s departure will be explained, but Brown guesses that with “three kids, a degree and a business,” there’s plenty of ways to do it. Community plans to introduce two new characters this season to replace her and Jonathan Banks, who’s busy with Better Call Saul.

Brown will surely be missed, and perhaps by none more so than her Community family.

There will be tears in my Yardmarg at Skeepers tonight.—, Love, Tinkle-Town. RT @YNB: Thanks for the years of laughs & love.

.@YNB I love you so much, Yvette. Thank you for blessing my life these past 5 years. Wishing you nothing but the best. – xoxo ken

While the departure of Brown’s co-stars Chevy Chase and Donald Glover in previous years was more controversial among the show’s ever-passionate fans, Brown’s decision has been met with nothing but support and love.

@YNB my dear Yvette, so sad to hear about your dad’s health, but so very proud of you for standing so tall at this crossroad. I tip my hat 😔

@YNB Thank YOU for always being an unceasing light of positivity on social media and for your wonderful portrayal of a beloved character.

@YNB Stay strong. All the best to you and your dad, and to everyone really. We’ll miss you. No one’s gonna take your place. Not even Subway!

Brown, who’s very active on Twitter, thanked everyone for their kind words.

To say I am floored by the outpouring of love for me & my dad would be the world’s biggest understatement. #ThankYou is insufficient…

But please know, you all have touched my heart more than words can say and have made me proud to be a #HumanBeing! I adore you guys! xoxo