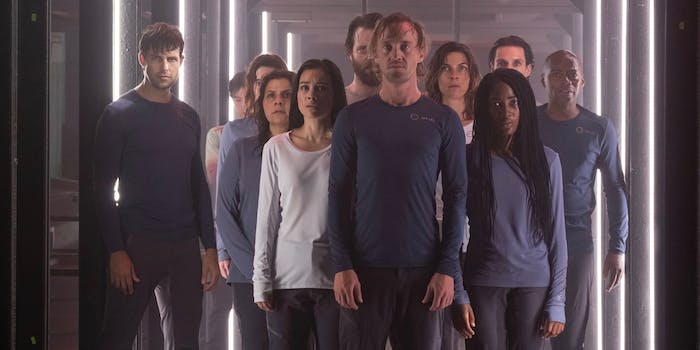 ‘Origin’ throws strangers onto a spaceship with some familiar tropes

Origin, YouTube Premium’s latest entry into long-form television, immediately places viewers alongside the passengers of a ship who find themselves stranded in the middle of space. The claustrophobic nature and isolation of space heighten the ensuing tension and terror, but the show can’t quite shake its ties to other great science fiction stories.

One of the more evident comparisons is Lost, which had a similar premise at its onset. Instead of a deserted island, Origin strands a group of strangers on a spaceship. They have to trust each other in order to survive, despite being given every reason not to. Meanwhile, a series of flashbacks details exactly what brought them to this point. While something nefarious bubbles beneath the surface, the bigger threat may be much more human.

“I just wanted to write something that felt very scary, because it felt like the characters were people we could relate to, and they react like people would who are not space explorers,” creator Mika Watkins told the Daily Dot at New York Comic Con last month.

One of Origin‘s main draws is its relatability. Each of the characters—and during the first two episodes made available to critics, we only get to know a couple of them intimately—clearly have their reasons for traveling to Thea, a distant planet that’s capable of sustaining human life. Sure, some volunteers (and qualified candidates) might sign up for the Thea colonization effort, but Siren Corporation offers a much more enticing opportunity: everyone who joins gets to wipe away their past and receive a fresh start.

That promise guarantees a wide variety of applicants. Some of them have skills that prove helpful on a stranded spaceship, but others are completely out of their element. They struggle to navigate the labyrinthine ship or operate its computers, and they’re unused to climbing vast structures to access a data entry point. One character might express abject horror at discovering the person who took on a daunting task isn’t an expert. But when you’re on a ship and there isn’t a qualified person in sight, it’s kind of hard to complain. All the passengers have their own carefully guarded secrets.

With Paul W.S. Anderson (Resident Evil) directing the first two episodes, the show quickly develops a distinctive look and feel as it balances the spaceship and the flashbacks. The visual effects are stunning, but the practical effects involved to bring the unknown to life make it even more impressive.

Shun (Sen Mitsuji) and Lana (Natalia Tena) quickly emerge as leaders, with glimmers of their pasts rising to the surface as they investigate what’s happening. They’re each wary for different reasons, showcasing that even though their pasts have been erased, they still affect them profoundly. Out of the rest of the cast, Logan (Tom Felton) gets the most screen time to date. He lashes out at others who are trying to help, and so far his personality mostly consists of stringing curse words together in nearly every situation. Even if the twist is predictable, Origin tries to subvert it in more subtle ways.

Origin sets up plenty of mystery that it will likely explore throughout the first season, such as what happened to the crew that abandoned the ship, the dead passengers who were left behind, and who these passengers really are. It’s a sleek and well-crafted drama that leans on familiar tropes. (Outside of Lost, Alien comes to mind). But once it sorts out its various threads, Origin could become a much more fascinating show.

All 10 episodes of Origin drop on YouTube Premium Nov. 14.